Utopia landscapes is a creative office which specializes in landscape design, urban planning and hotel design. Our office, based on the Filopappos hill in Athens, was founded in 2005, by the landscape architect Anastasios Tserpelis, and comprises a broad range of professionals – landscape architects, architects, interior designers, horticulturists, lighting design specialists etc. We have accumulated substantial experience both in the design and in the implementation of landscape plans, in the public as well as the private sphere. However, as a result of the complexity of the projects we have undertaken, the spectrum of services we offer has expanded to include other proximate fields, such as the design of landmarks for public spaces, the architectural redesign of building facades and selected interior spaces, in other words, to include design in its broader sense.

Here at Utopia landscapes, we have established our reputation as a landscape design practice by producing original and technically rigourous creative proposals, and by paying attention to detail. Our projects’ design style is pleasantly surprising, bestowing liveliness and character to urban spaces, parks, squares, home zones, hotel grounds and private exterior spaces. Each space is studied independently and transformed after a process of careful observation, inspiration and creative design. We focus especially on underlining the qualitative contribution of the greenscape (softscape) elements and we are conscious of the need to ensure a harmonious relationship between our proposal for regeneration and the broader architectural and natural surroundings of the area under study. Our final goal is, through our passion for design, to add value to every space we study, exploiting its full potential and improving the quality of life of its users. 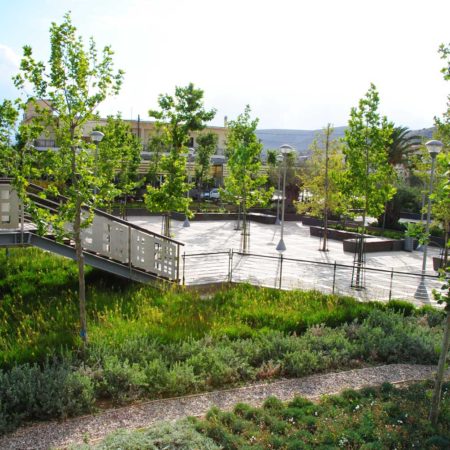 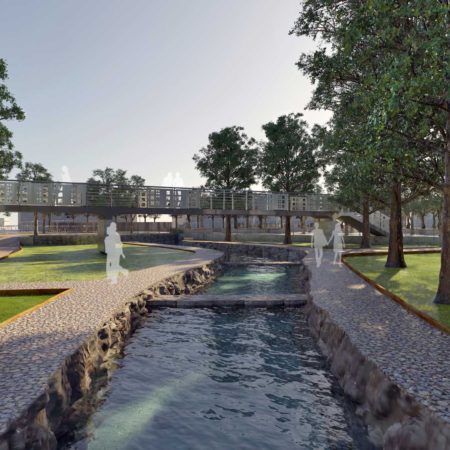 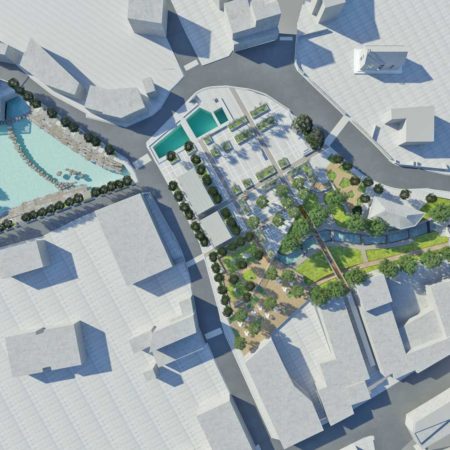 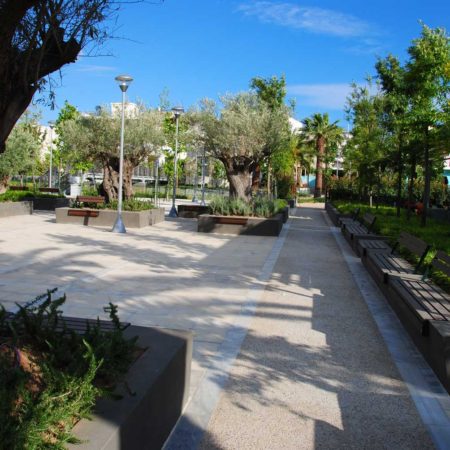 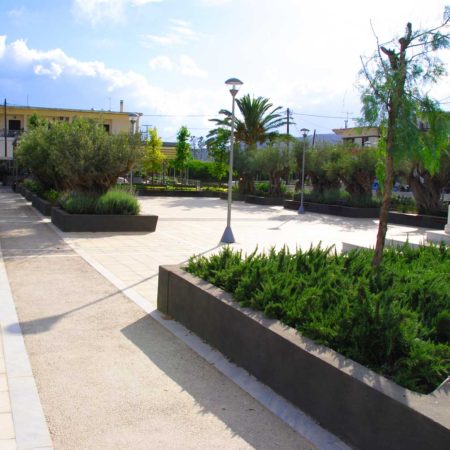 Utopia landscape was commissioned to design a group of spaces called ‘Pigon Square’, the central square of the rural town of Skala in the south of Greece. In Greek, the name ‘Pigon’ means springs, and indeed the site is located on natural water springs. Hence, although semi-urban, this is also quite a sensitive freshwater ecosystem. The primary aim of the design was to protect this delicate ecosystem, while also transforming the site into a destination, a locale capable of catering for the day-to-day needs of the local community. A parallel aim was to integrate the square sub-spaces into a unified whole. A green design approach was followed in an effort to protect and restore the natural and water systems. The focus was not only on fully managing stormwater runoff but also on creating and integrating pedestrian spaces into a coherent whole. The design also makes cultural references to the square’s environmental heritage. Inner plaza green structures have been designed to continuously delay and purify discharged water in a visually enchanting way, turning the water flow into a sequence of events. The flowing water successfully links together all other elements, i.e. the greenscape, the hardscape structures and the individual ‘Pigon’ place parts to a vibrant whole. 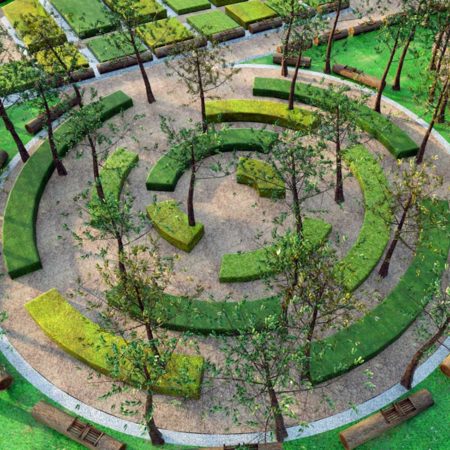 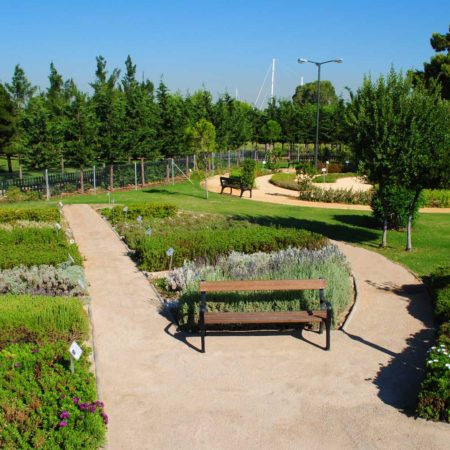 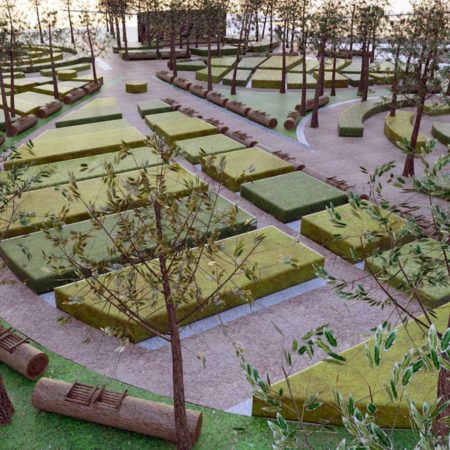 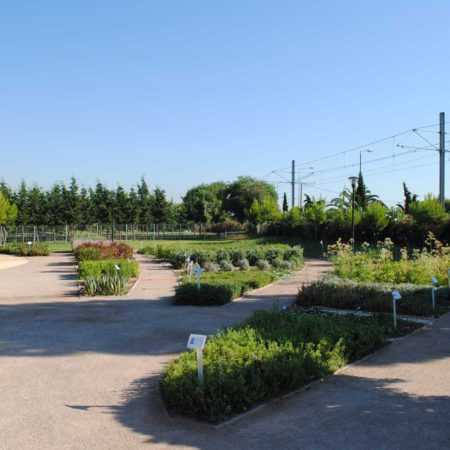 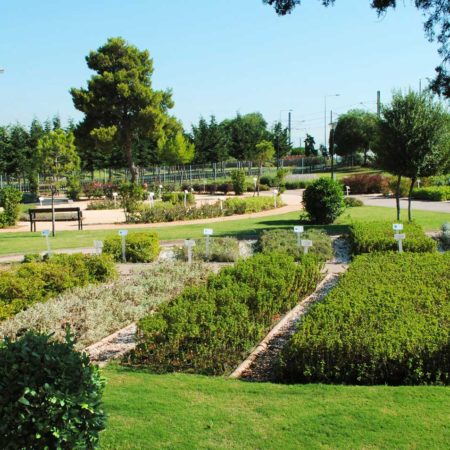 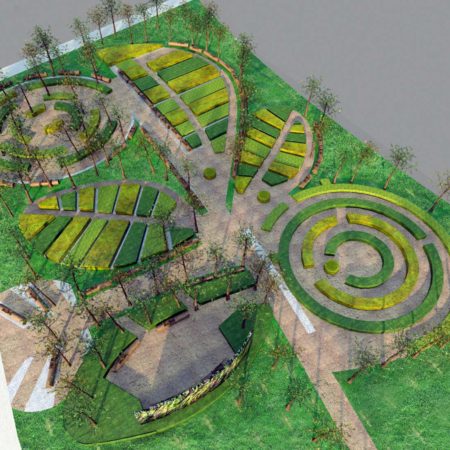 The Botanical Garden in Park Floisvos. The objective of this project is the creation of a neoteristic botanical gardens, with symbolisms drawn from the floral kingdom, aimed at inspiring the visitors and especially the children. An interplay of the senses is provoked by the landscape design of this botanical garden where colours, scents and the variety of forms are merged into a hymn for the nature of the Mediterranean. 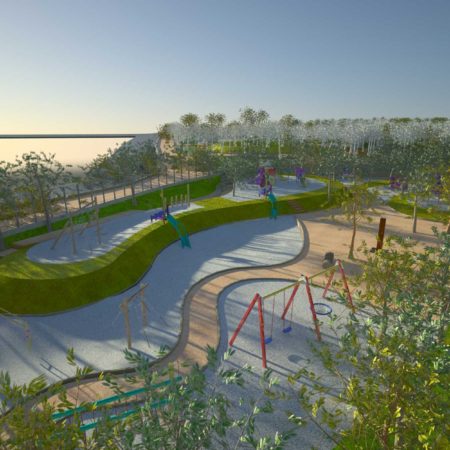 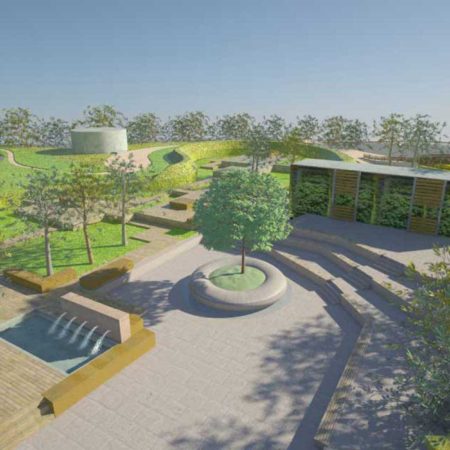 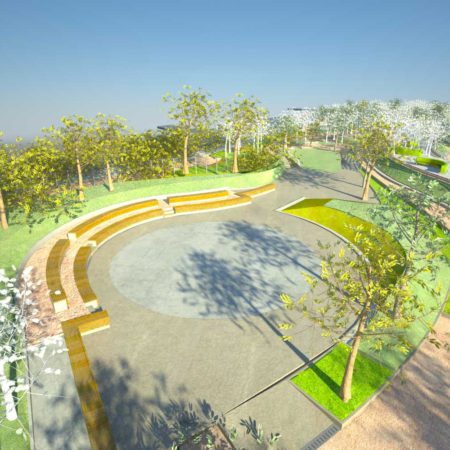 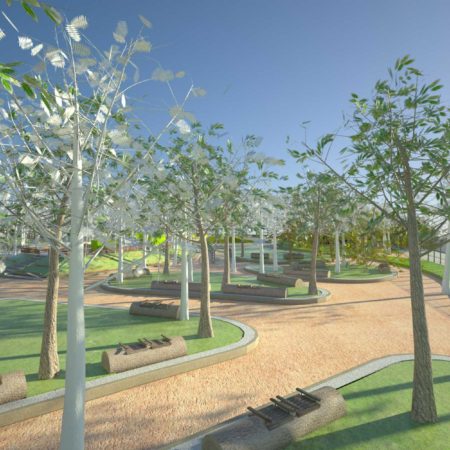 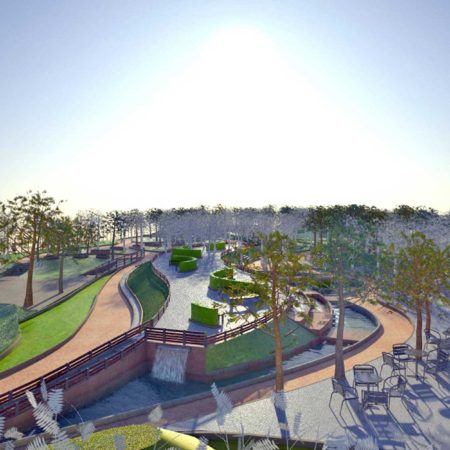 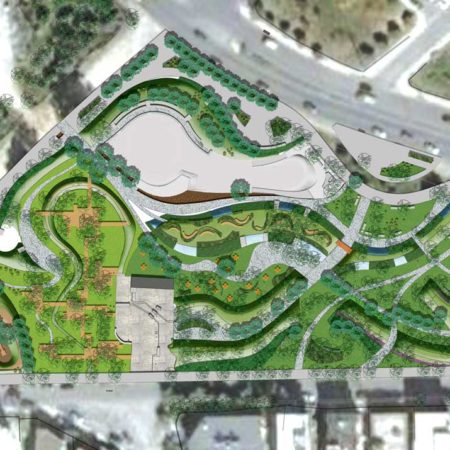 The guidelines offered by the local authorities for the landscape design of this large-scale project required that we respect and showcase the ecological nature of the area under study. Essentially, our role was to create an urban park, one which would however have all the functionalities required to meet the diverse and immediate needs of the two neighbouring densely populated municipalities’. The park was developed into thematic units: the playground, the field, the amphitheatre, the natural space, the hill and valley, the north entrance. These spaces were formed using low, elongated hills, which run across the entire landscape in undulating organic forms. The network of major and minor paths was also entirely redrawn, tailored to the new arrangement of sub spaces and allowing entry points which are natural extensions to the main streets of the surrounding urban landscape. Conversely, the planting plan was largely a continuation of the existing flora, which is enhanced and highlighted with thoughtful and imaginative interventions. 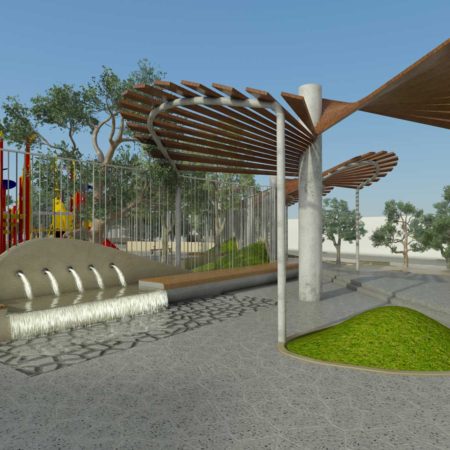 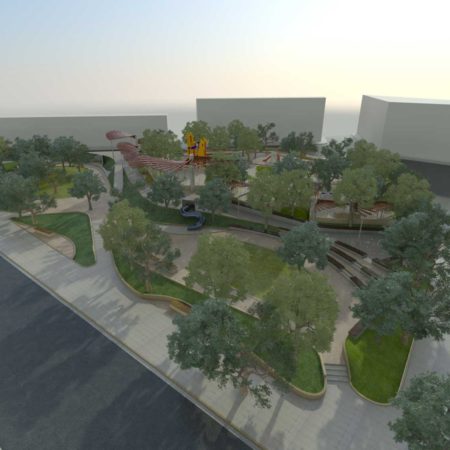 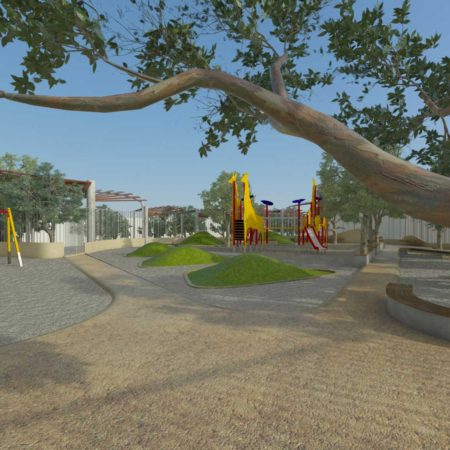 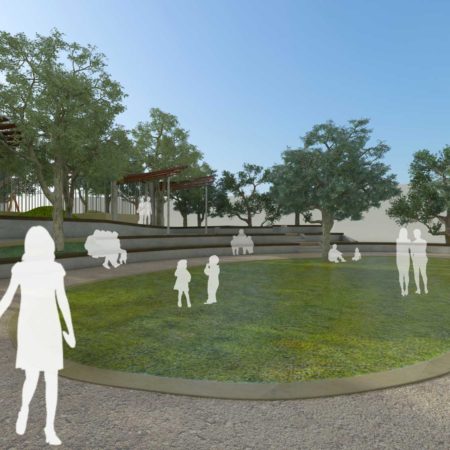 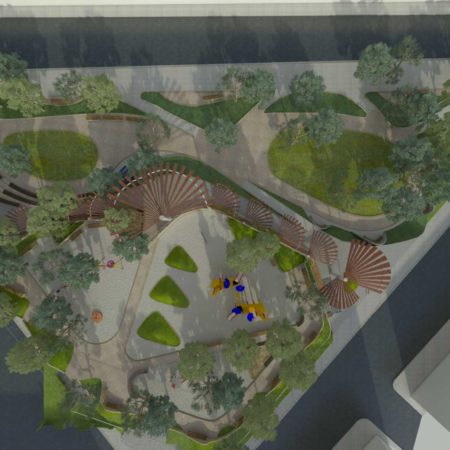 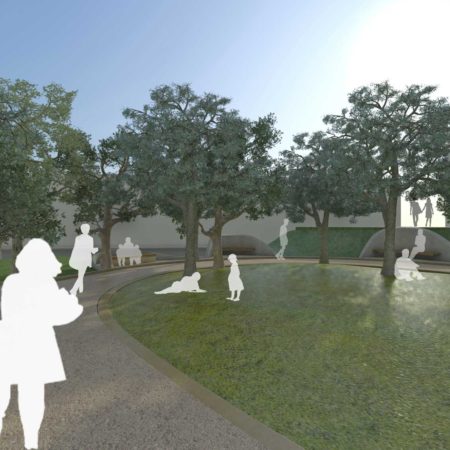 The design philosophy underpinning the Zisimopoulou square regeneration centres on creating a friendly and functional communal space through green design and the introduction of contemporary elements. We aim for versatile spaces which permit multiple uses, as is necessary in the urban landscape. However, we also take care to inspire the feeling that this space resembles a closed-off small-scale park. We design levels with soft slopes. We preserve all the existing trees but redraw and unify the spaces and axes of movement. Our aim is to use vegetation and greenscape design to create a coherent urban green space with comfortable micro climate and pleasing aesthetic forms, an attractive contemporary square which will make a difference to the lives of the local population. 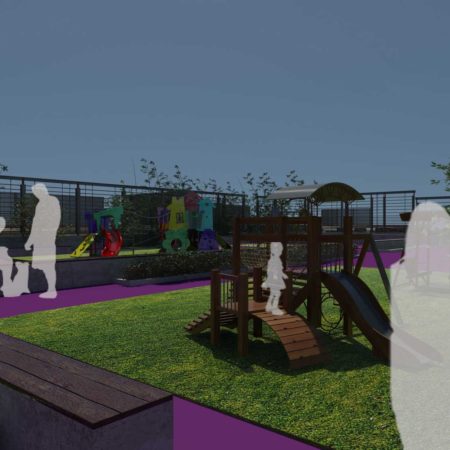 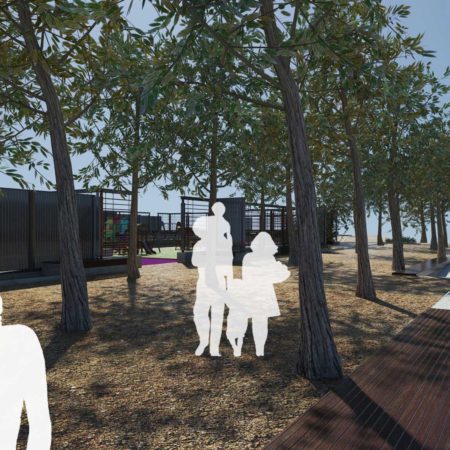 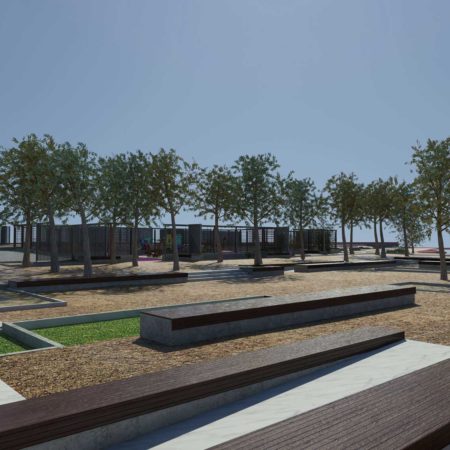 In our approach to this project we tried to enhance the versatility of the square and the of multiplicity of its uses, both of which are elements necessary within a densely populated urban area. We maintained all natural elements and strive to highlight them in a contemporary yet functional manner. The olive grove is a clear example of this effort. Vegetation is used as a means of framing, encompassing and emphasising spaces. We handle the square as a small-scale park, with sub spaces of varying sizes, tailored to match the needs and the local character of this suburb.