In the suburbs of Paris, Bagneux is a city currently undergoing a profound transformation and densification with the arrival of two metropolitan stations : the extension of line 4 in connection with the new line 15 Grand Paris Express. The Victor Hugo neighbourhood both anticipates and accompanies this change, with the planned construction of new dwellings integrating the existing built landscape, the restructuring of the road network, and recomposition of the urban blocks. The existing landscape structure serves to unify the separate elements of the neighbourhood creating a sense of place and identity. 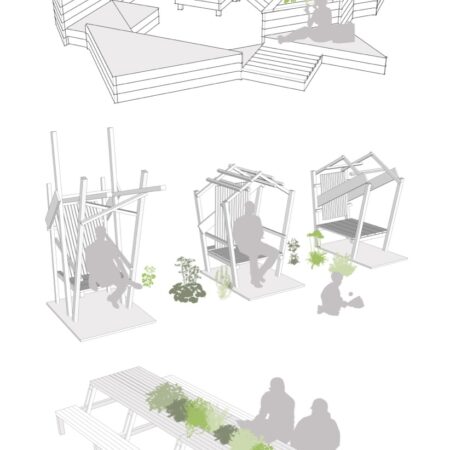 The first phase of the development, the theatre district, comprises a diversity of uses including offices, apartments, cultural and amenity facilities, whilst the landscaped public domain provides a common thread offering spaces for social interaction between the local inhabitants.

The new Place du Théâtre, set in front of the existing cultural edifice, is decorated with an artistic labyrinth design enhancing the paving at its centre, and provides a generous setting for open-air activities, street entertainment, and cultural events.

The surrounding green areas, lush with planting, provide a more intimate setting for quiet contemplation in the shade of lines of trees and amongst the herbaceous borders.

A former private estate forms the basis for the creation of a public garden with a network of pathways meandering between the tall trees, where a 19thC grotto is enhanced by the quiet ambiance of a flowering grove under a woodland canopy. The varied density of the trees filters the light in certain spots and creates glades in others. A playground for children with small play shelters, and communal gardens complete this richly-planted composition.

A transformation and urban densification of this scale inevitably raises the fundamental questions of the preservation of the environment and the importance of social issues. In this respect, the project succeeds in retaining and enhancing the strong presence of plants, permeable soils and finishes, and the prioritisation of an attractive public domain connecting the neighbourhood.

Today, its has become essential to preserve areas of deep, fertile soil in the urban context. Whilst increasing the built density of the district, we have not only managed to maintain the coefficient of permeability, but have improved it, increasing the extent of permeable soils by 2%. We have doubled the amount of public spaces, and increased the number of trees by 50%, for example, by planting the streets, even the narrow streets, thus providing much needed climatic cooling. Pedestrian routes are accompanied by continuous dense planting, and the squares are provided with shade by judiciously sited groups of trees benefiting from a good depth of soil.

From the outset of the design phase, we were particularly keen to integrate an alternative management of rainwater in the public areas. A network of planted drainage channels, and sunken gardens collect rainwater for natural filtration, and, in so doing, reinforce the green framework, and contribute to the reduction of excessive temperatures in the urban centre.

In Bagneux, we have, and will continue, to work with the inhabitants in the participatory process of creating the town, by means of workshops and interactive projects. It can sometimes be a challenge finding an agreement between old and new inhabitants, but it seems that in Bagneux we are getting there!

Bringing together the local actors in an inclusive design process gives meaning and life to a place. Enabling the townspeople to see their surroundings with a new eye, also enables them to  imagine inhabiting and using new places.

From the start, in coherence with local policy, the suitable conditions for an active participation of the local population were created, including the setting up of a citizen’s jury, organised walks, local workshops with inhabitants, and other activities coordinated with the active involvement of the design team.

One such workshop resulted in the design of furniture and fixtures for the communal gardens, which were subsequently built with the inhabitants participation in March 2019 under the supervision of members of the design team and building contractor.

The great challenge of this project ,and its merit, has been the densification of a diverse and contrasting part of the city within the framework of a considered approach to fertile soils, a structured green network, the planting of all public areas, and a reflection on each individual’s place within the city.