The parti pri of the requalification of the Fumel swimming pool was to re­think its implementation and its reorganization on the site, to at once offer an optimal use of its equipment and allow a better foot print in its context. Its entrance was therefore moved to the south­west angle of the property to connect the equipment with the other sports and cultural entities of the neighborhood and give it a more public and accessible facade. The massive building which was juxtaposed to the pools was replaced by a series of small light­built buildings that accompany the user through a path, invite him to discover the site and progressively go towards the pools located on the lower part of the grounds. The project nears this site as a landscape fragment in continuity with the natural existing area:

-­ it recreates a geography coherent with the hillside : a softer landscape greets, in contrast, the unique and geometrical objects that are the buildings, pools, games…
-­ it implants an oak grove, new and different, but in continuity with the existing vegetal structures. The « vital » functions of the swimming pool such as the locker rooms, showers and snack bar, are conceived as extensions of the wooden fence which limits the area and dilates in its contact, following the slope and offering a generous space for the exterior lay­out.

This way, the walk grows through an oak grove set there as a reminder of the pre­existing natural environment. The path is drawn as a long ribbon of concrete which widens to become a building’s floor or small square allowing people to admire the views of the pools or neighboring landscapes. A vegetal work was, also, specifically developed to compensate for the installation of the fencing around the pool beaches. On one side, a thick limit is composed of a mixture of half clipped, half free form boxwood, St John Wort and ruscus, chosen for their dense foliage. On the other side, a plant channel limits the north perimeter of the beaches by a band that collects the run­off waters and the beaches’ washing waters. It thus meets with high foliage wetland plants with varied flowerings which force the users to use the footbaths.In the middle of this very simple and extensive vegetal landscape, very visible red elements punctuate the area: a slide is a long ribbon which runs on a mound,a ping­pong table on the lawn of the solarium, the guiding line on the ground for blindpeople, painted signs on the planting accessories thus become ornamental and identity of the space.In parallel, a game of wooden lines gives rhythm to the site as a whole : by the design of the buildings but also by the stakes of the chestnut fencing of the wooded enclosures or even the bench seats designed for the site.The vegetal parti pri which consisted of extending bits of the natural area present on the north side and particularly on the south side of the site, drove the conception of an oak grove, with its own particularities, creating an unexpected setting for swimming.It is composed of four different species of oak, which, mixed randomly on the site create a variety of silhouettes and of raised cover foliages.The oak grove growing slowly, the strategy of plantation in time is put in place, allowing for a composed space at the opening of the site and richly evolving, in several stages:

-­ « young seedling under the trees » (thefirst years) : the space is then structured by wooded enclosures planted with young plants and protected by painted wood fencing and its association with some larger plants. The plantation accessories become ornament, allowing to work the geometry of the space and draw « vegetal rooms ».
-­ « the young woods » (between 7 and 15 years) : at this stage a first thinning and the opening of the wooded masses will allow to use the site in a new manner and to discover there new framings, to clear new views.
-­ « the oak grove » (after 15 years): the wooded area becomes more homogenous, a second clearing harmonizes the densities. The « vegetal rooms » have become clearings. 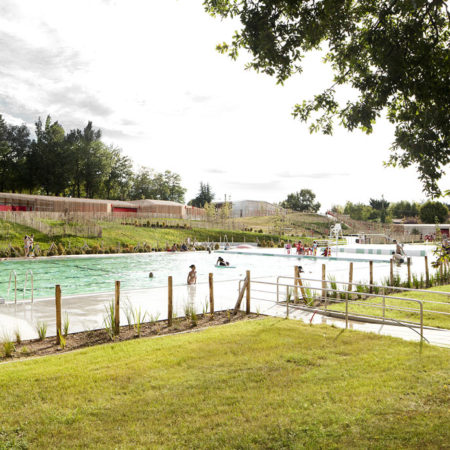 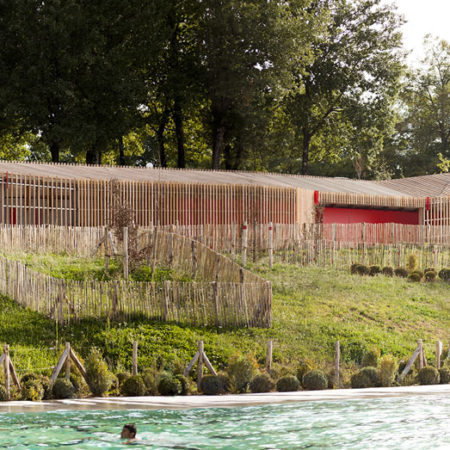 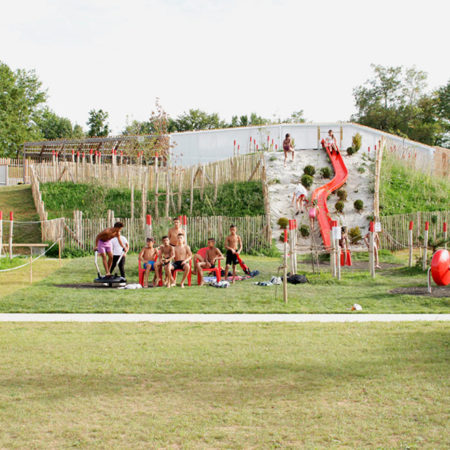 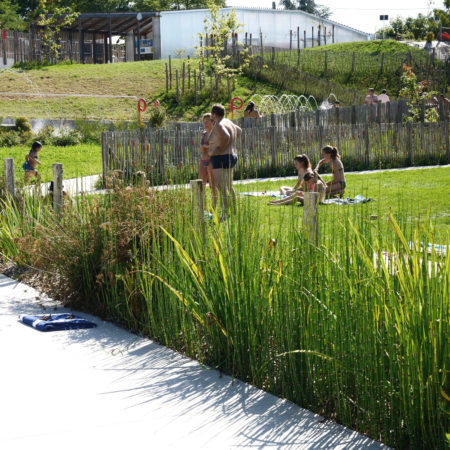 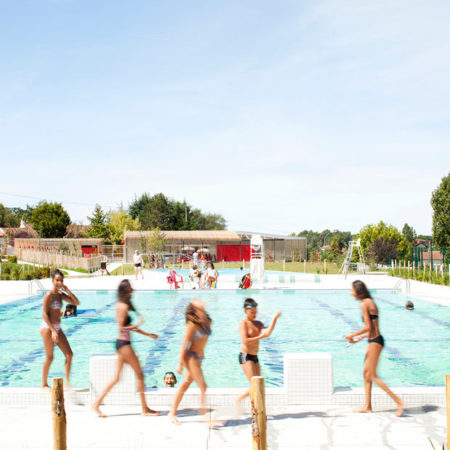 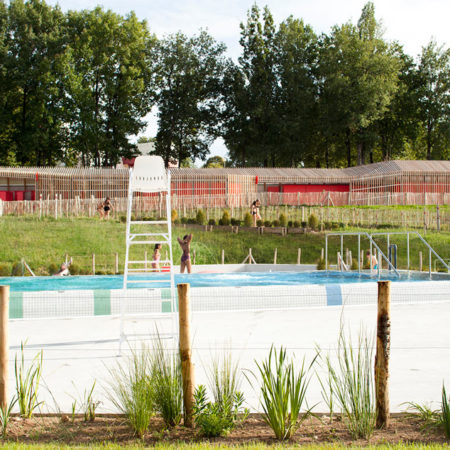 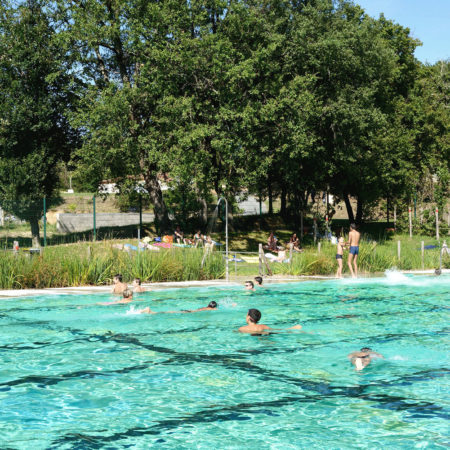 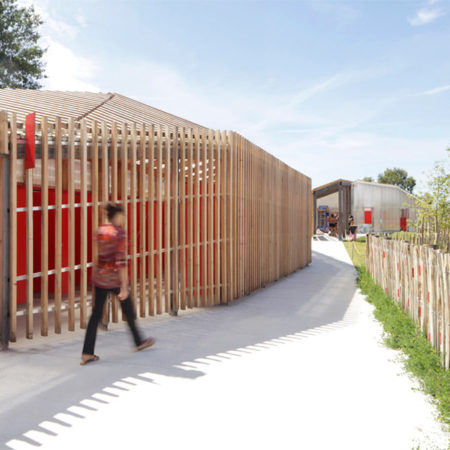 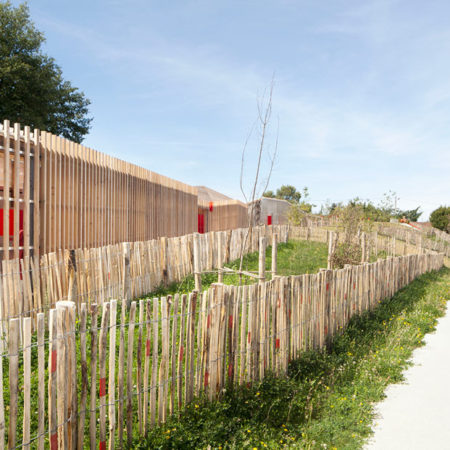 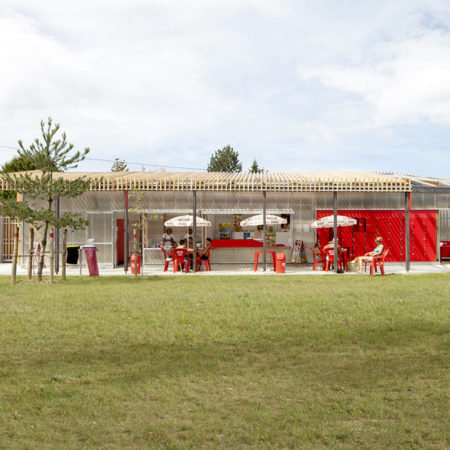 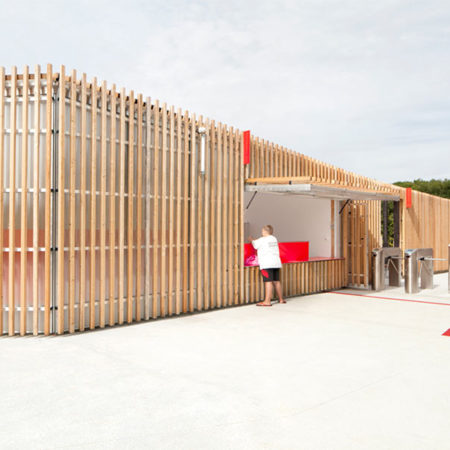 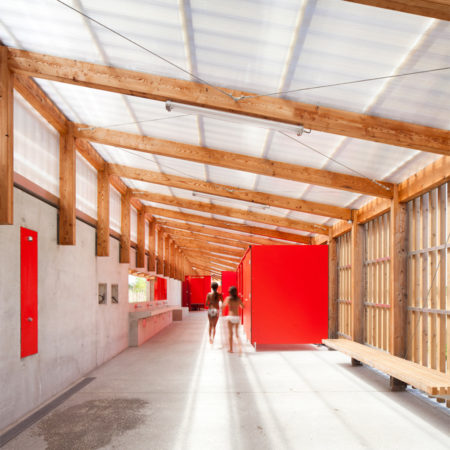 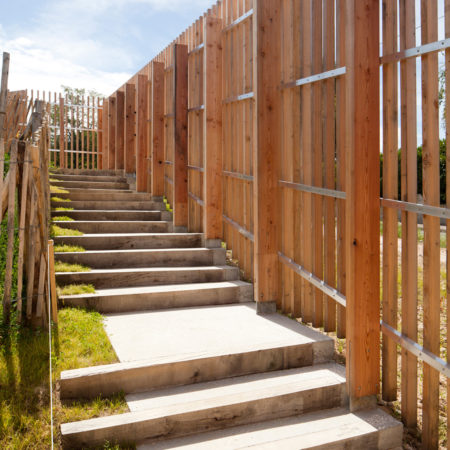 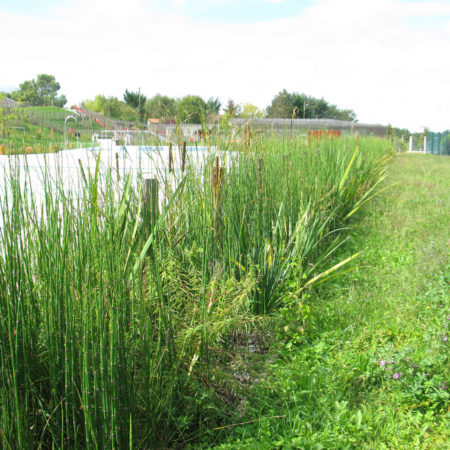 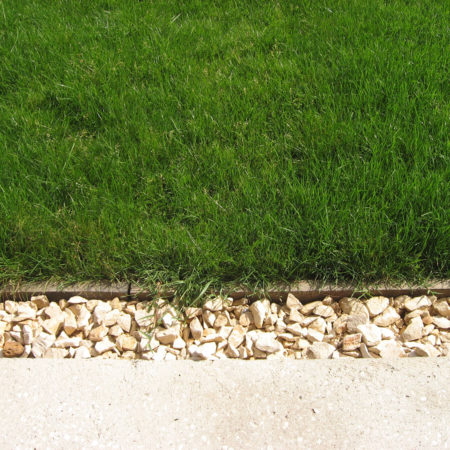 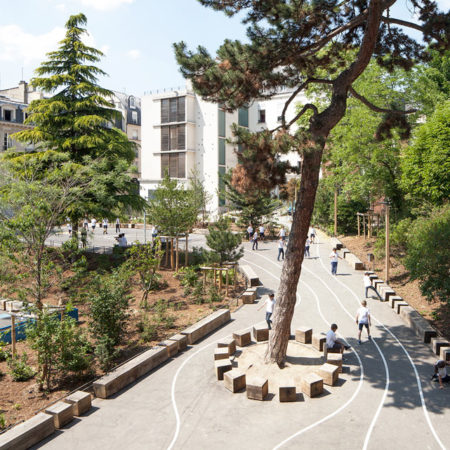 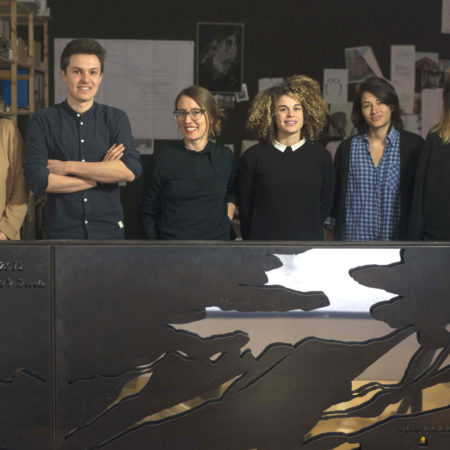 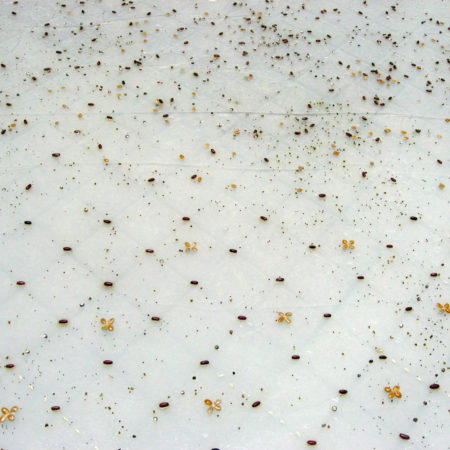