The West Kowloon Terminus Express Rail Link is the final stop in China’s nation-wide high speed rail system linking Hong Kong to destinations in mainland China. This new gateway brings approximately 80,100 passengers per day into the heart of the city. The experience of arriving at a city speaks to an understanding of a places identity, values and priorities. This project envisages Hong Kong that is moving toward an urban vision that exemplifies the concepts of green infrastructure, a project where specificity of place, program, ecologies and structure come together. 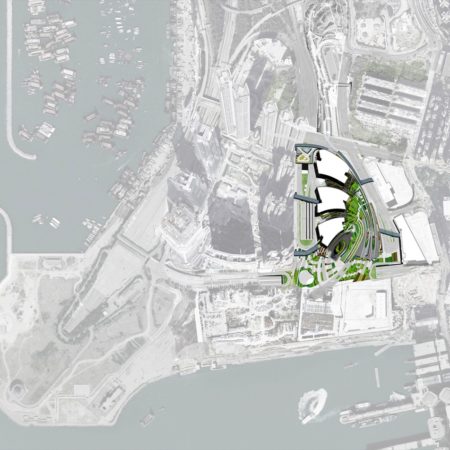 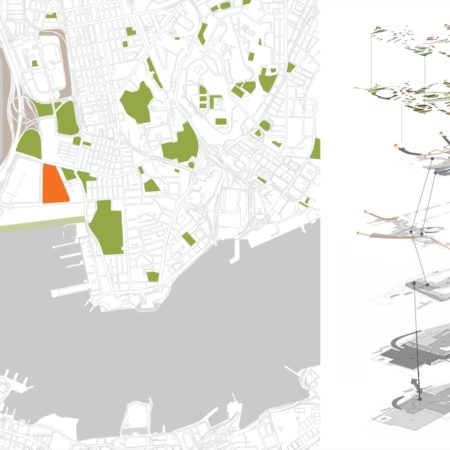 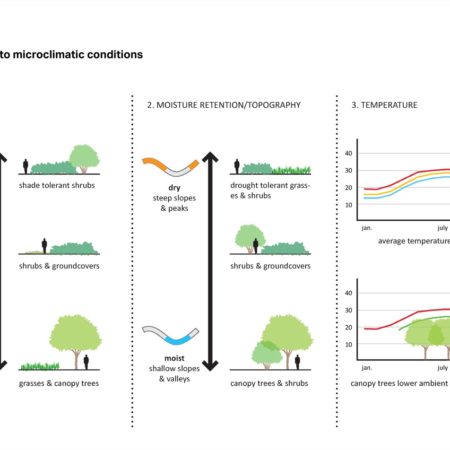 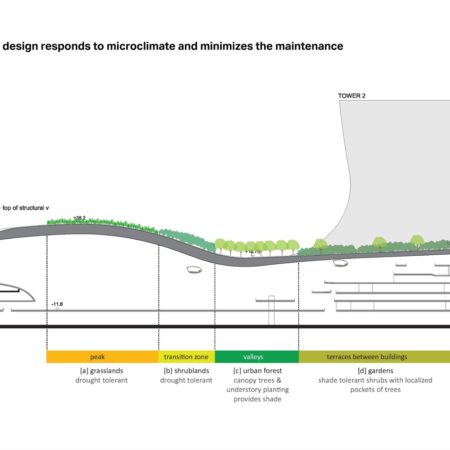 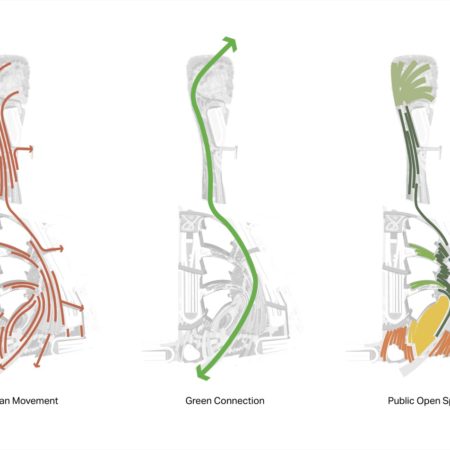 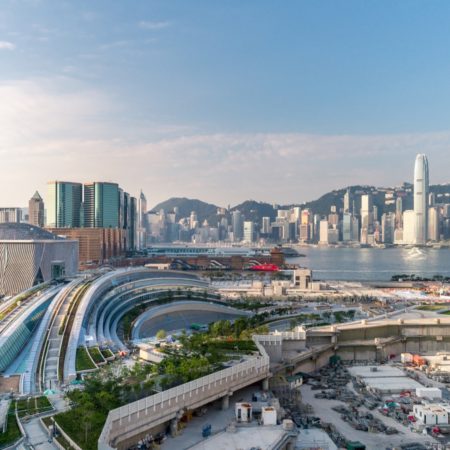 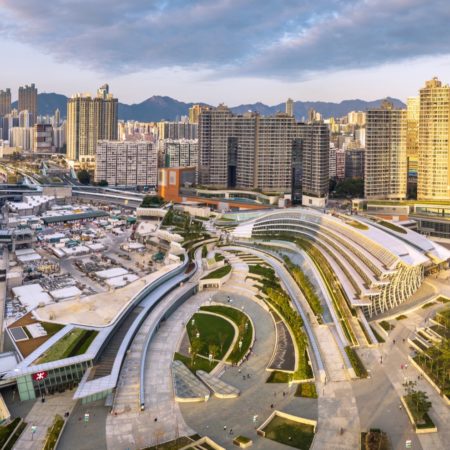 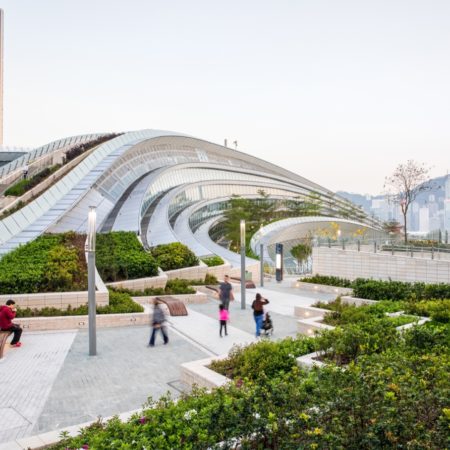 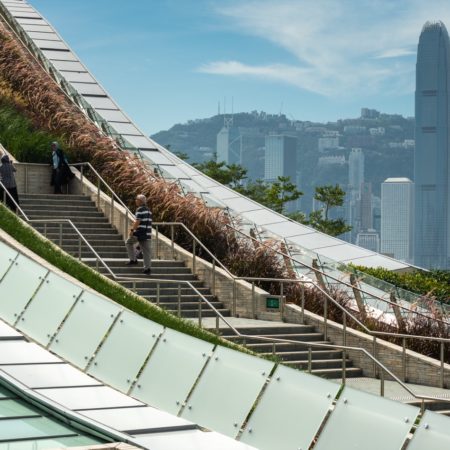 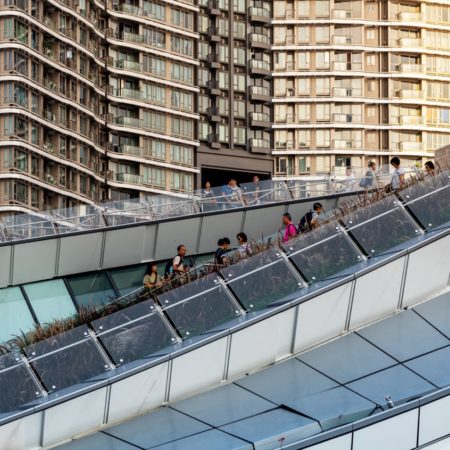 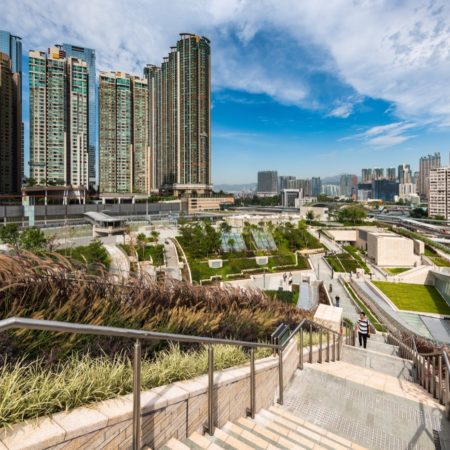 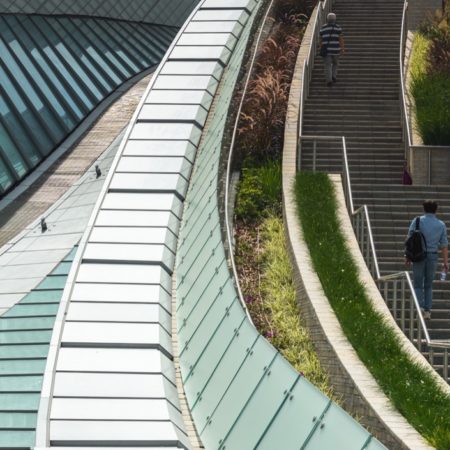 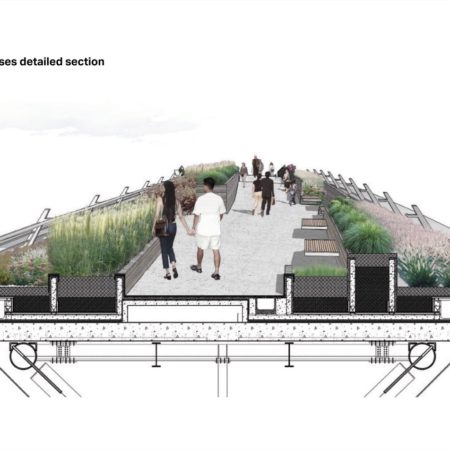 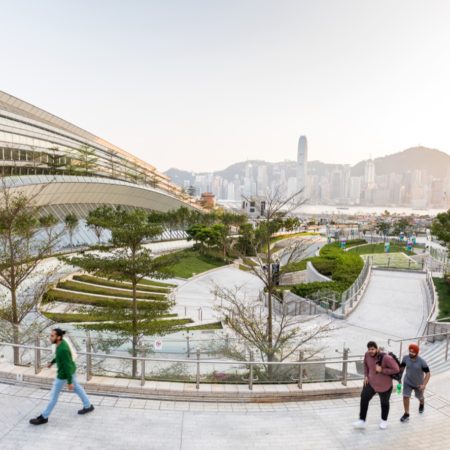 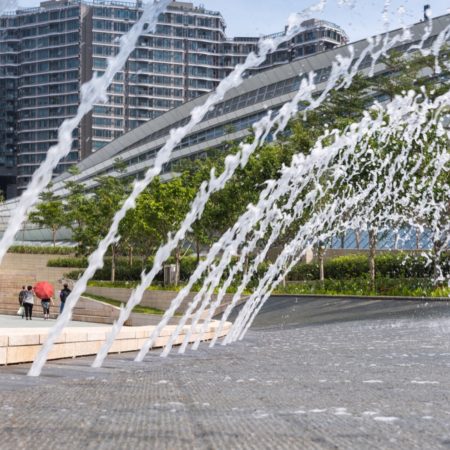 As the team conceived this project, the important confluence between infrastructure, landscape and place making as a new urban typology became clear. Our vision was for the Terminus to transform the urban dynamic. By advocating for and re-prioritizing public green space as a vital part of the design, the team re-calibrated its importance beyond a rail station but as a new piece of green infrastructure that celebrates a more livable, sustainable, connected urban environment influencing the future development of Hong Kong’s public realm.


A Green Gateway for Hong Kong

Hong Kong has historically been an international transportation and exchange hub. Its infrastructure driven urban development has created a model for the modern, efficient city it has become. Hong Kong is also an international gateway conveniently connecting Asia. The West Kowloon Terminus continues this legacy becoming a green gateway with a new emphasis on place making, connectivity and sustainability. Its design aspired to sets forth a new paradigm, re-thinking the role of infrastructure in city making and its ability to create a more vibrant cultural, and a livable and connected urban green infrastructure as public realm.

By re-thinking how ideas of urban greening, connectivity and sustainability informed the design and development of new transportation infrastructure, it was clear that the West Kowloon Terminus was an opportunity to create an integral piece of green infrastructure that had not yet existed. This project stands out as an example of how infrastructure can become part of a city’s public realm, creating dynamic civic spaces; populate urban gardens and transverse architecture through landscape. In building this landmark, the project ignites the city’s green transformation.

The West Kowloon Terminus has been a long time in the making. Occupying a prominent 9.65 hectare site in Hong Kong’s West Kowloon district, the terminus is located between the old, densely-populated urban districts of Tsim Sha Tsui, Yau Ma Tei and Mongkok to the east, the new West Kowloon Cultural District to the west. Since 2010, a multidisciplinary team has worked on developing the complex design for this multi-level station with its sizable urban footprint.

Completed in 2018 at a cost of 10.75 billion dollars, it has redefined the process and design of urban architecture, landscape and engineering projects. Built on reclaimed land, with an immense scale of excavation and structure of this underground project was one of the largest in the history of Hong Kong. Its ground level was also all constructed on structure. With the complexity of the engineering as well as the architecture and its engineering, the challenge for the landscape was in mitigating the urban context and creating a welcoming public space.

A Benchmark of Urban Transformation

Our integrated design approach strives to maximize the strategic and socio-economic importance of a direct connection into China’s express rail network. At its peak, the Terminus will serve up to approximately 81,000 passengers per day. This level of connectivity impacts and transforms the urban dynamic through social, cultural and human capital and investment. And, its importance as a product of the political and economic currency for the Greater Bay Area initiative. In this respect, Terminus represents the future of Hong Kong and its urban transformation. In considering it as a benchmark, the design expresses an open and connected future and a drive to create a more sustainable, greener urban environment. As a statement of these influences impacting the city, the project strives to articulate the physical and spatial urban transformation seen in the integrated design and efficient and artful expression of its forms and landscapes.
Green Infrastructure as Public Realm

The team’s vision was to build a landscape within this densely populated urban setting that expanded on the concept of green infrastructure. A connective tapestry of roof gardens, urban parklands and open spaces create a continuity of movement through places for people to gather, play, talk and relax. The green fabric is the foundation for making integrated sites whilst the confluence of natural elements, the layering of landscape becomes the connective fabric weaving, stitching and merging the site and spaces. The confluence of movement to, through, and from the Terminus site drives the form of the landscape. With circulation at the forefront of the landscape scheme, this concept promotes efficient interaction between the various elements of the West Kowloon Terminus and its surroundings by facilitating integration of people with the many transportation facilities, the city, the West Kowloon Cultural District, the harbor front and nature.

In developing the concept of urban diversity, the team wanted to distinguish and reveal the urban and ecological diversity that exists within the city environment of Hong Kong. We also wanted to be inspired by the city’s green natural landscapes. With this as a starting point, we mapped the surrounding open space systems, identifying existing parks and urban open spaces as a way to identify the urban patterns. We were the able to see the implied connectivity that already existed. By placing our landscape design into that existing urban fabric a more complete picture emerged connecting green spaces to frame a more diverse urban ecology and topography. From this we were able to better utilize native and adapted plant material and materials in the design.

The Terminus also reflected some of the natural attributes of the natural landscapes in its dramatic station design creating opportunities to express similar ecologies in our planting design strategy. We utilize a grassland concept at the highest elevations of the station and progressed to a shrub land and urban forest. This transition also informed the experience and movement from one area to another.

The West Kowloon Terminus, at its core, pushed forward the ideas of connectivity and sustainability both as design construct and as an idea about place making and experience. As a construct, the design creates a formal landscape language that merges with the architecture and connects to the urban fabric. Yet, in re-thinking green infrastructure, the experience of the spaces reflects how the beauty of a designed landscape can create a vibrant public realm.

As part of that experience our design had to consider the seasonal climate of Hong Kong, the ambient temperature and air quality and ultimately the experience of the visitor. With these in mind, the design created a diverse, but linked series of landscape spaces and ecologies based on their location within the station development and its position and elevation. Pedestrian circulation defines the landscape spaces and pathways. Lines of informal and formal plantings move along the sweeping forms of the station, while dynamic changes in elevation connect from space to space. The urban forest with its large canopy trees creates a pleasant verdant environment with shaded pathways and filtered light. The civic plaza is designed to accommodate seasonal events while providing amble spaces for daily informal seating and gathering. A playful jet fountain adds the sound of splashing water and cooling spray.
Flowering terrace gardens step down to accommodate the elevational transitions along the edge of future office towers. Linear landscape ribbons lead to through the grasses of the promontory gardens to the overlooks viewing out to Victoria Harbor.

The importance of West Kowloon Terminus is in its complexity and comprehensive vision for green infrastructure. This project aspires to re-envision the way infrastructure projects are developed prioritizing place making and the landscape as a means to connect people, place and the city. 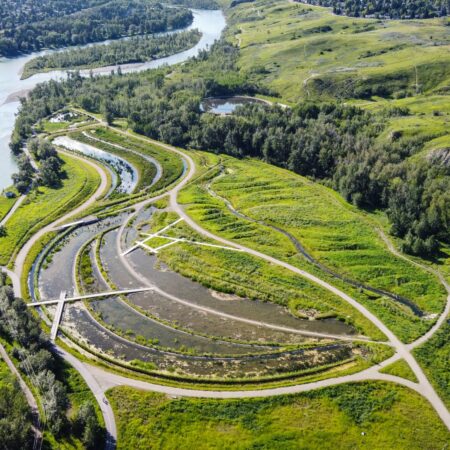 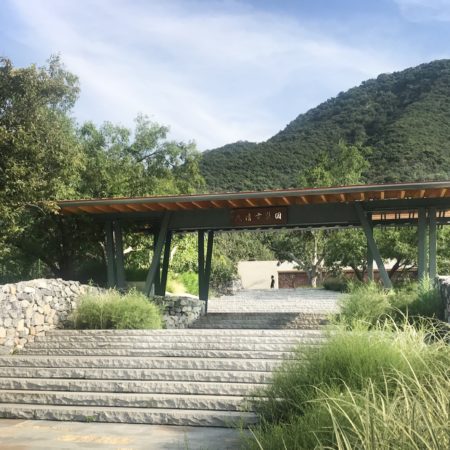 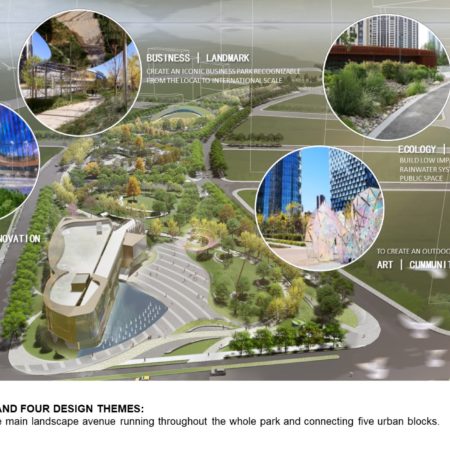 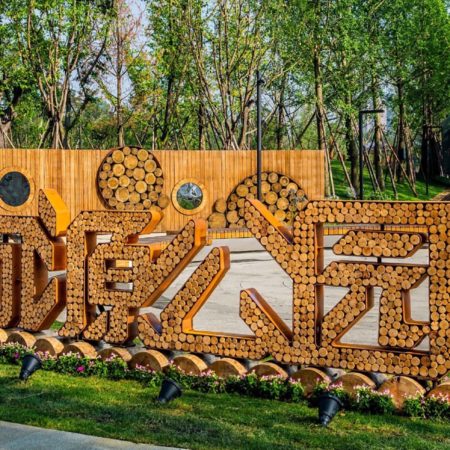 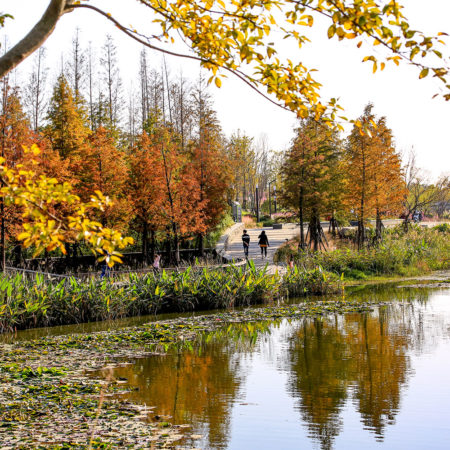