White Collar Factory is located in east London on the Old Street roundabout between Shoreditch and Clerkenwell. It is the result of an eight year research project by architect Allford Hall Monaghan Morris and the client Derwent London about how to create modern, sustainable office space inspired by key attributes of industrial buildings such as tall ceilings and flexible floorplates. The scheme comprises a complex of six buildings for working, living and socializing with a sixteen storey tower topped with a 150 metre running track, together with a new piece of public realm. The open space ties the new buildings together and gives a chance for occupiers and residents to meet and socialise.

The new public square created the opportunity to open up a new east-west route between City Road and Mallow Street through Old Street Yard passing through the green courtyard, forming an oasis sheltered from the noise and fumes of the Old Street Roundabout. The square contains a café, raised planters with trees and understorey planting as well as generous grassed areas to encourage people to stop and rest.

BBUK worked closely with the architects on the layout and form of the concrete raised planters which in between each one create intimate seating areas spaces throughout the courtyard. Unfixed furniture is placed within each of these spaces for maximum flexibility; in addition the tops of the planters are designed with generous copings so can also be used for seating. 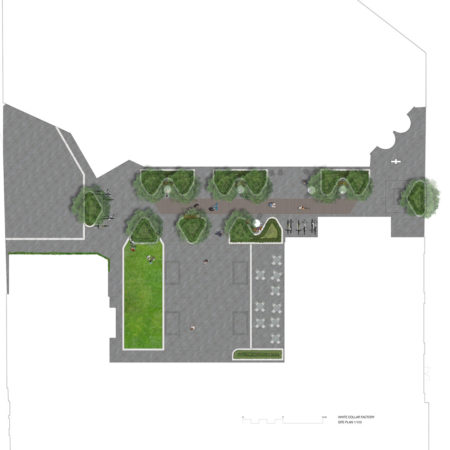 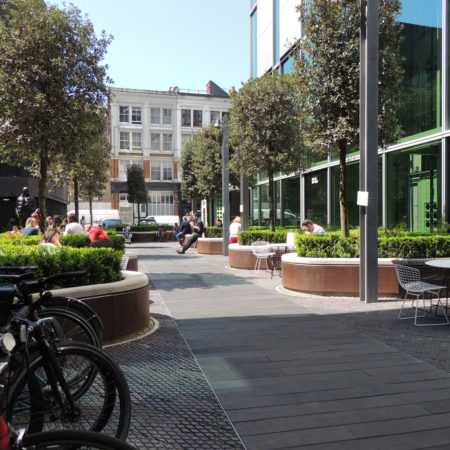 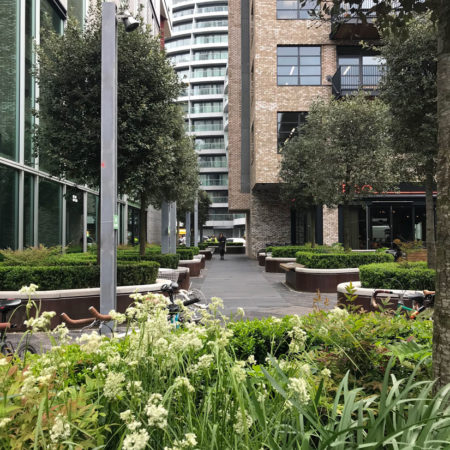 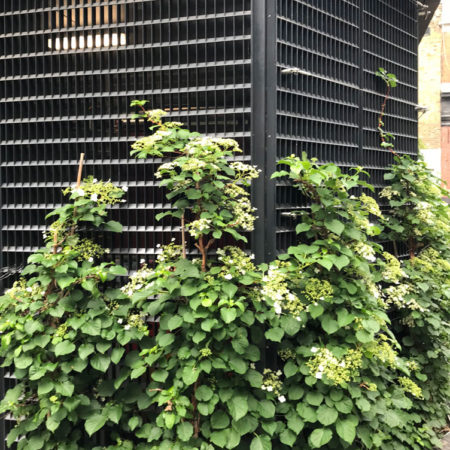 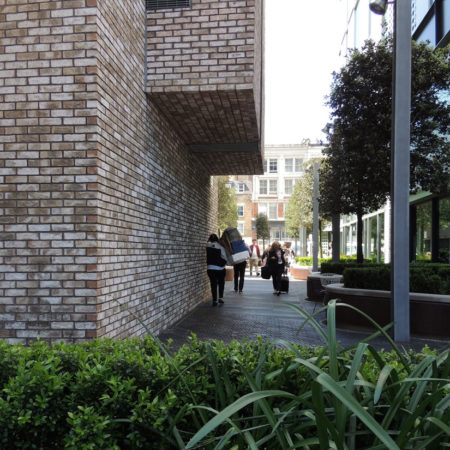 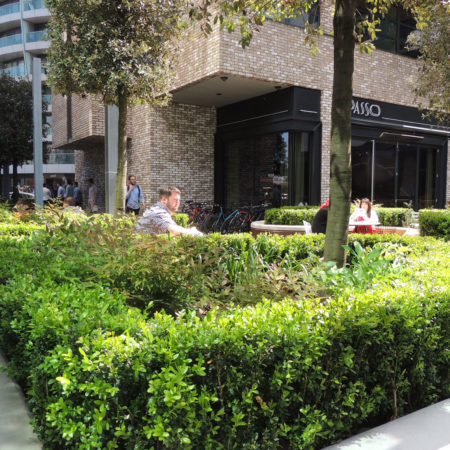 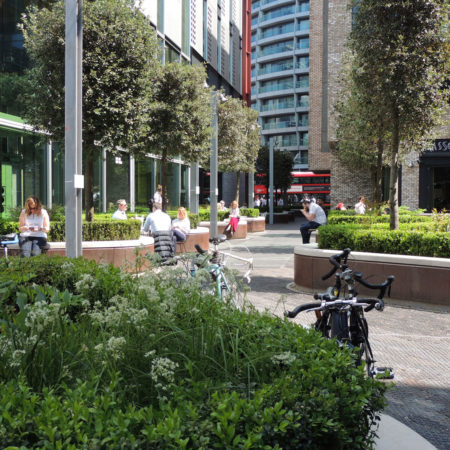 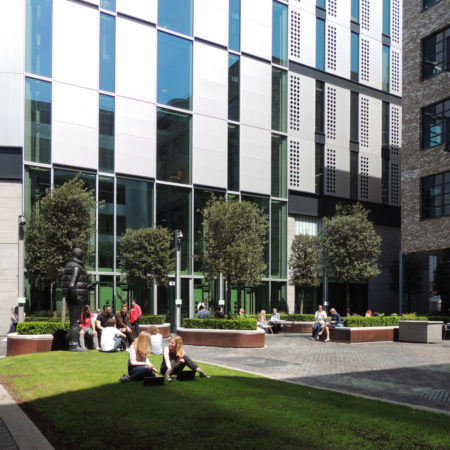 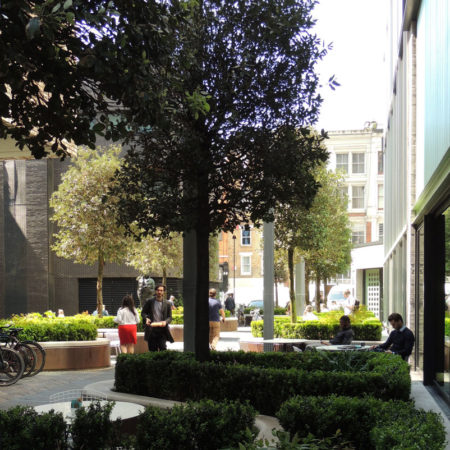 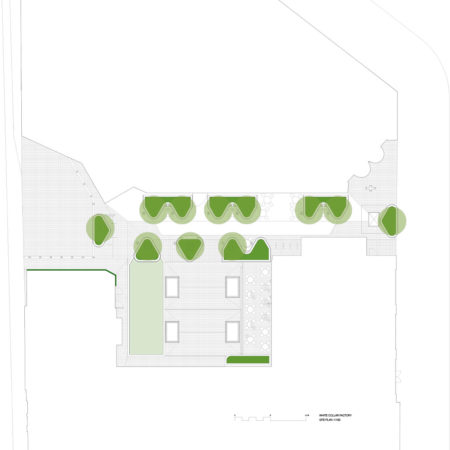 The ground surfaces were paved with recycled blue stable bricks. This material shows varieties in colour creating an interesting patina to the pavements. A central board walk signals the boulevard between City Road and Mallow Street.

Evergreen oak trees, Quercus ilex were planted at the base of the tower in order to give all year interest as well as attenuate the wind from the tower. The trees were ordered from the nurseries twelve months ahead of the planting date to ensure that eleven matching trees were available. BBUK worked closely with the engineers to ensure the trees provide optimum wind attenuation therefore the placing of the trees was coordinated it was agreed that trees will provide maximum impact if through ongoing management crowns are maintained at a six metere diameter, which also ensures they do not grow too big for the space.

The trees were under-planted with a range of native and native in character flowering and berrying plants to visually enhance the space and boost the local ecology. As many of the plant species specified are deciduous, they are all planted within an enclosure of a low box hedge. The planting palette is chosen to flower from early spring through until autumn. The seasonal planting mixture of bulbs, herbaceous and small shrubs gives the space variety and animation throughout the year.

A generous lawn is provided for sitting out during the summer months. Half of this is in shade through the majority of the year, so a robust shade-tolerant lawn mix was specified for the southern half, while the northern end of the lawn, which receives more sunlight, is planted with a species-rich turf that further adds to the sites increased biodiversity. A sculpture ‘Network’ by Thomas J Price is placed on the lawn. This depicts a young man checking his mobile phone, mimicking an action carried out by passers-by countless times a day.

The cycle store containing space for nearly 300 bikes is clad with steel mesh and this is surrounded with a planting trough that has been planted with the white flowering, self clinging climbing hydrangea, Hydrangea petiolaris, that will soon cover the whole elevation.

On the sixteenth floor of the tower, the outer skin of the building extends upwards to protect a track around the perimeter, on which the Building Maintenance Unit (BMU) is mounted for cleaning the facade. This only happens four or five times each year so for the rest of the time the mounting becomes an outdoor running track, providing a most unusual additional amenity for building tenants.

In creating a new piece of city, White Collar Factory and Old Street Yard work together as a new city neighbourhood bringing together a range of different uses – live, work, play – as well as a spectrum of spaces in between. It is an antidote to the harsher streetscape of the Old Street roundabout, and brings together a diverse community of users in a place which can grow and evolve with them.