To establish an “empty” landscape which does not emphasize the elements of the landscape themselves, so that the elements are melted in the harmonious interaction between nature and humanity. One’s regret for reality fades away in face of the presented memory, and the marvelous feeling at the moment stretches deep down the nature of everyone’s heart. 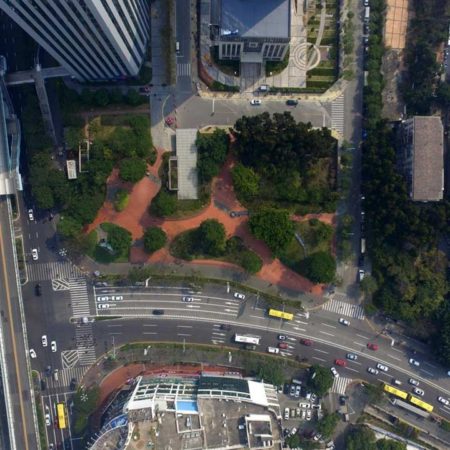 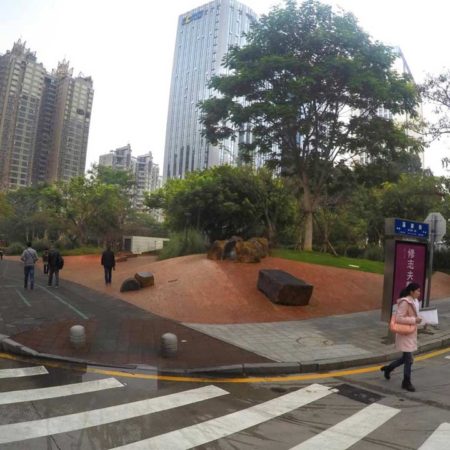 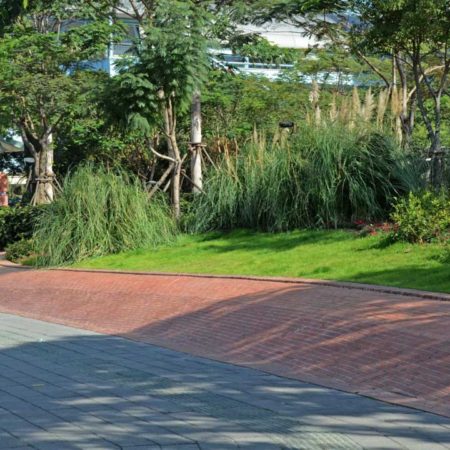 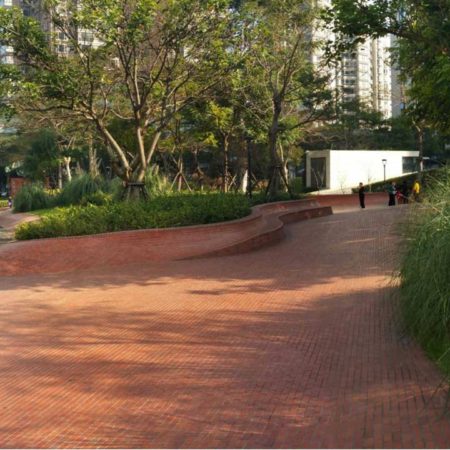 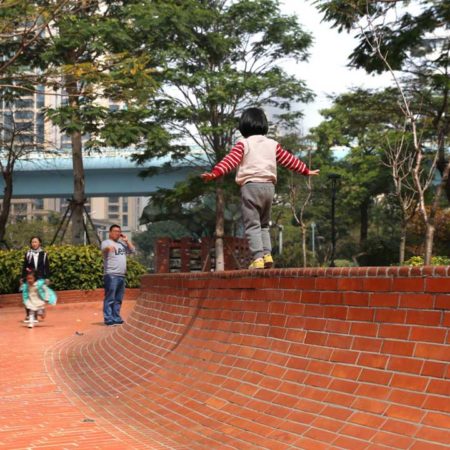 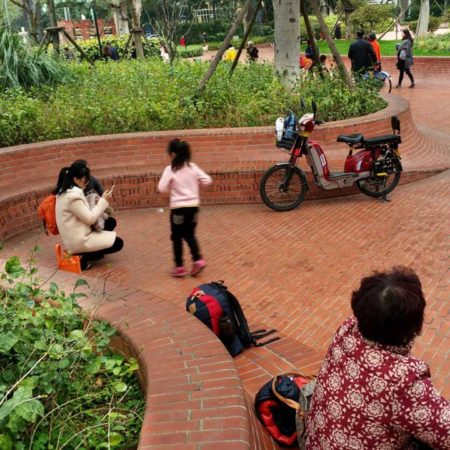 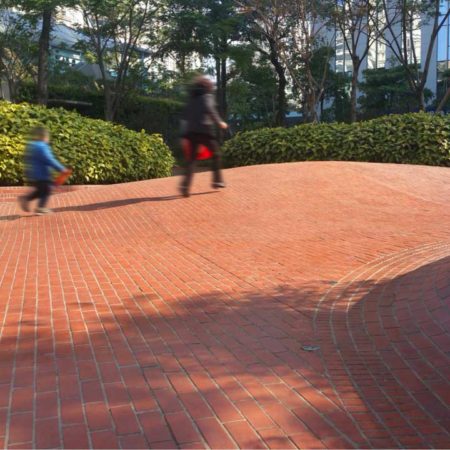 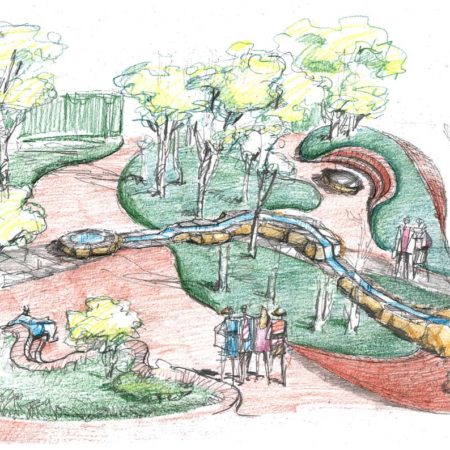 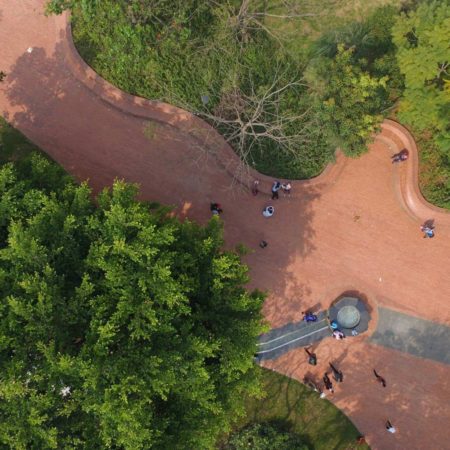 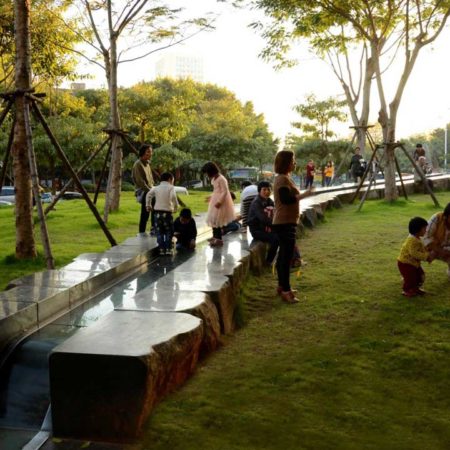 In 2013, like other cities in China, Xiamen’s real estate craze was in ascendant, while the city characteristics had vanished with nothing left. This project is located at the center of the city’s dense population community, around which there is no inner garden within the residence available for civic activities and the activity space for citizens is extremely limited. For hundreds of years, with thick historic accumulation, it has once been the folk cultural center in this city.

1、 Create a place where people of different status and age can take part in activities in the densely populated area.
2、Fully demonstrate the local traditional cultural and natural features.
3.、Realize the organic cohesion and integration with the surrounding environment.

A、 Red brick in south Fujian is the local construction material. It becomes personalized after in combination with granite.
B、Tropical trees with large crown breadth and strong shelter function, such as delonix regia, banyan; shrubs and ground covers with natural countryside elements such as cerasus campanulata, bougainvillea speetabilis and pampas grass. They are streamlined into the construction, bringing out idyllic atmosphere.
C、 Since an earthing pond needs to be made on the underground garage, the pond edge is made into seats of all functions or activity facilities. For example, on the premise of safety and reasonability, a rolling topography is created for the children’s roller skating.
D、 Inspired by the concept of outdoor museum, a “space-time river” is set. The old articles collected during the process of local housing removal combines with the local endemic stone, which makes up the concept of outdoor museum and moulds river shape.
E、The memory wall, transformed from the basement ventilation shaft, not only displays the precious historic photos, but also collects some information graphics about vegetation, sky and weather from the citizens during the implementation process. On the upper end of the ventilation shaft is an artistic installation which is folded into Japanese banana leaf shape by newspaper. If you look carefully, you can find that the content of the newspaper is exactly about news reports regarding the construction process of this park.

The final implementation and presentation of the park has far exceeded the expectations that customers and citizens held about the site regeneration and establishes a new template for the artistic expression of local cultural inheritance. By means of innovating the construction method, it has re-constructed the construction materials and “ready-made objects” that people can see everywhere in daily life. It’s intended not to overturn people’s imaginations for these routines but to try to revoke people’s awareness for historical memory about site.

After the completion of the park, people of all groups such as youngsters, old people, residents, office workers and tourists were attracted. The successful space planning and layout have made the park a place with all-weather active atmosphere. There were old people doing morning exercises and youngsters jogging in the morning. At noon, office workers from the office buildings in the vicinity accumulated there. It’s the most bustling at night when middle-aged and old people who are dancing and keeping fit regard the park as “paradise”.

From the beginning of design, we held prudent attitude towards innovation. Gradually, we entered the process of re-integrating the abundant biological and cultural resources in the area. We experienced intensive acceptance from the public after the final completion. During the whole period, we found that the contained potential and social effect had been far beyond the originally set goal. They were valuable resources and fortune left behind by several generations living on this land.