A Sydney Harbour setting, within the UNESCO World Heritage curtilage of the Sydney Opera House, Campbell’s Cove Promenade Upgrade reinvigorates a crucial link along the waterfront of Sydney Harbour and its “Cultural Ribbon” – a nature and culture walk that celebrates and connects some of Sydney’s most significant cultural landmarks, places and landscapes along the Harbour.

With its previous incarnation reaching its useful life, the New South Wales Government allocated funds for an upgrade of Campbell’s Cove. Building on the State Significant Development Application of JPW for the Campbell’s Stores and Cove Precinct, the objectives for the project included creating a greater sense of arrival, converting the old vehicle turning circle into a new public square, providing equitable access and establishing a distinctive curtilage to Campbell’s Stores and The Rocks Heritage Precinct.

As the lead consultant, CONTEXT maintained open lines of communication between the client, consultants, stakeholders and the public throughout the project, supported by workshops, 3D modelling and prototyping. 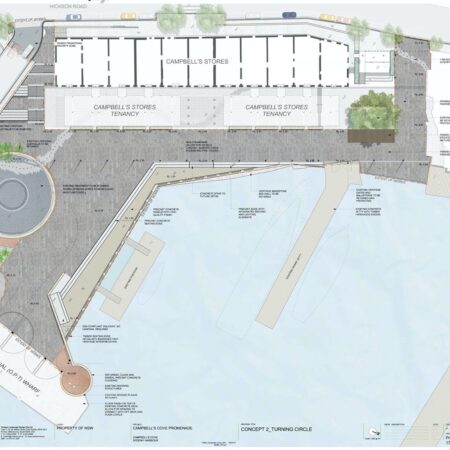 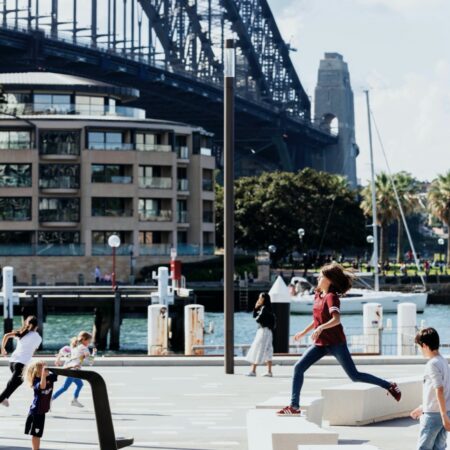 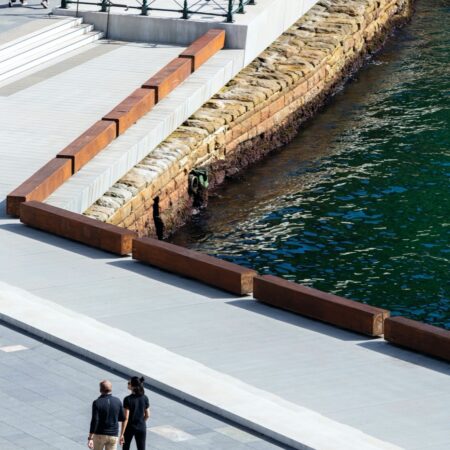 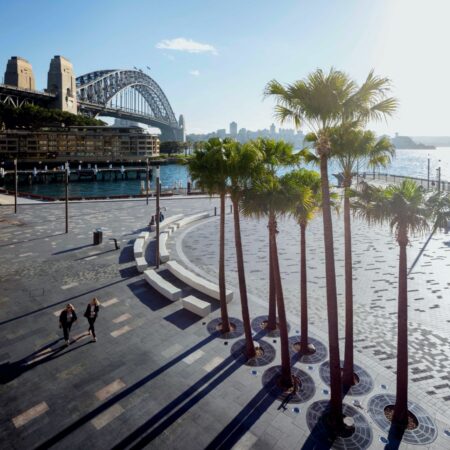 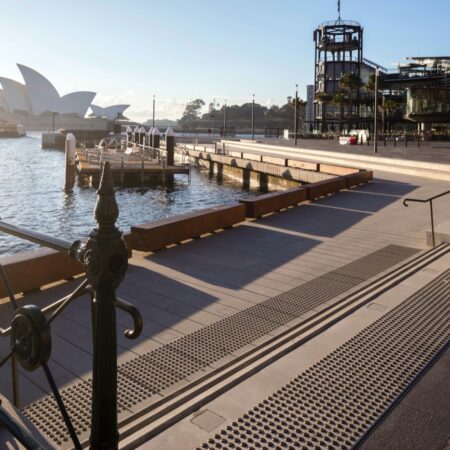 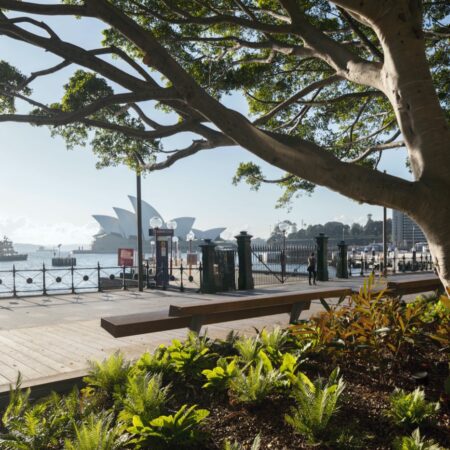 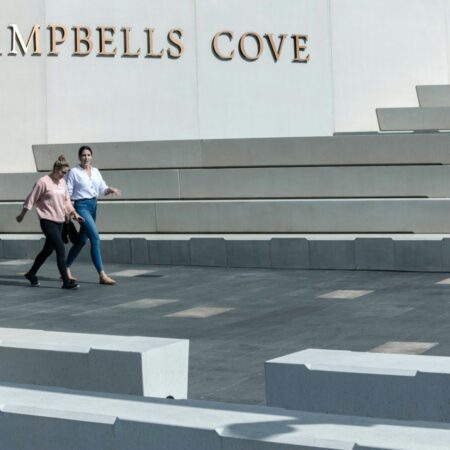 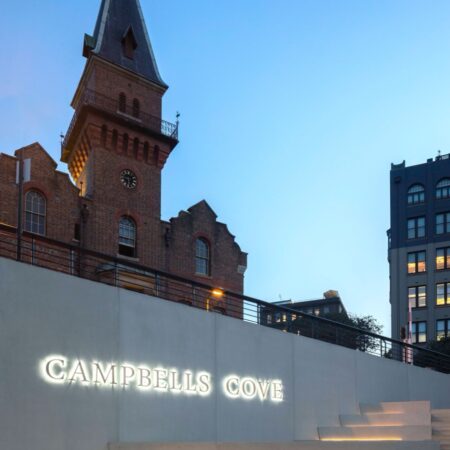 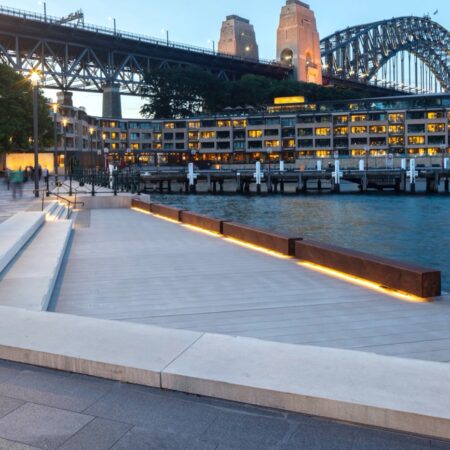 This collaborative strategy allowed the project team to prioritise and resolve competing operational requirements and user needs while being sympathetic to the heritage overlay. The resulting design produced a series of character zones each with their own spatial and functional requirements:
The Central Plaza creates a multi-use shared zone, which plays a pivotal role in Sydney’s cultural programme, including New Year’s Eve, Sydney to Hobart Yacht Race and Vivid Sydney. The Central Plaza supports these major events while complying with strict security requirements and a high frequency of service vehicles associated with the adjacent Overseas Passenger Terminal (OPT).

The sculptural stair/amphitheatre negotiates the level change between Hickson Road and the waterfront promenade, providing a vantage point down to the water and access to Campbell’s Stores.

Detailing the concrete stair required consideration of the existing bridge servicing the OPT, integration of the heritage warehousing and provision of a roof over the public toilets and service area located underneath.

The Pedestrian Promenade was lowered to improve both the visual and physical connection of Campbell’s Stores’ outdoor dining area to the waterfront. This intervention presented several design challenges, the most significant being the interface between the existing concrete and sandstone seawalls. Cantilevering the boardwalk structure over the heritage seawall ensured it was left untouched and allowed for the inclusion of lighting that illuminates the seawall and floating precast boardwalk.

The existing Port Jackson Fig became an integral part of the design, and innovative measures were taken to ensure its survival. Thousands of holes drilled into the surrounding paving permitted the installation of a no-fines concrete sub-base to allow gas exchange and water infiltration. Underneath the spreading canopy of the tree, a hardwood deck and bespoke bench seat invite passersby to rest and watch. Dry shade tolerant planting adds colour and texture below.
The materials were carefully considered to respect the history of the site and feature a selection of Australian granites with subtle variation of hues, tones and finishes. The paving design uses incremental dimensions, creating a seamless transition between the larger format pavers and smaller setts. This approach was used to delineate vehicle and pedestrian areas while creating a public square for events and informal gatherings.

The expression of history in the landscape is fundamental to the design of Campbell’s Cove. Archaeological finds are woven into the promenade as is the pre-1788 shoreline in the form of pixelated granite setts. The material selection also speaks to the present, in the form of precast concrete stairs, walls and boardwalk, which utilised BIM for accuracy and consistency of finish. Specialist review of the 3D geometry for all precast components achieved a seamless connection with the existing site elements. These processes reduced and mitigated risk throughout the project and ensured the project was delivered on time and within budget.
The Campbell’s Cove Promenade Upgrade not only achieves the project objectives but, more broadly, reinforces its significance along Sydney Harbour’s “Cultural Ribbon” and respects the UNESCO World Heritage curtilage of the Sydney Opera House. 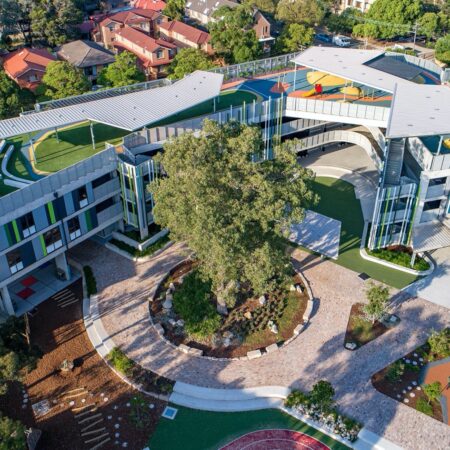 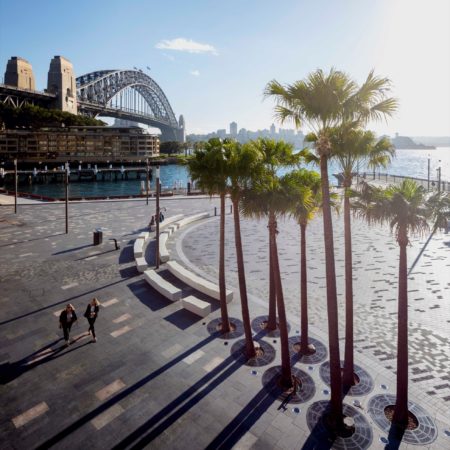