The Eastern Glades is the first major project to be implemented from the 2015 Memorial Park Master Plan developed by the Landscape Architect. Including introducing a formal entrance to the park, miles of recreational trails, and an established lake with surrounding ecology, the Eastern Glades reclaims 100 acres of previously inaccessible land at the park’s eastern edge, opening up new opportunities for passive and active engagement. The Eastern Glades embodies the overall principles that guided the Master Plan—to reconnect and restore the natural environment, strengthen ecological health and resiliency, and offer a beautiful natural amenity to the people of Houston.

The design of the new entry plaza welcomes visitors and further reveals the site’s history: new stone pillars mark the location of an original entrance to Camp Logan. The architectural detailing of the plaza walls and built-in stone benches are inspired by Houston’s civic architecture in the era in which Memorial Park was established. Surrounded by native plantings and set against a forested backdrop, this gateway conveys a ceremonial threshold to Memorial Park, inviting all to enter and explore. 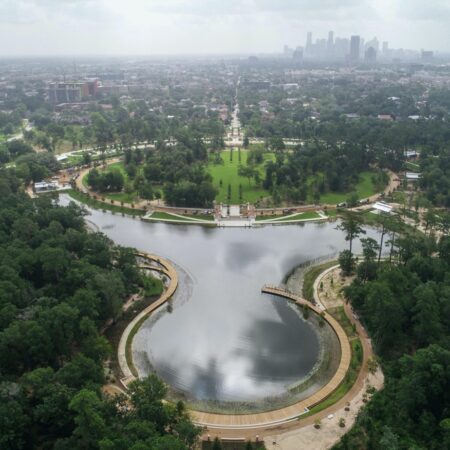 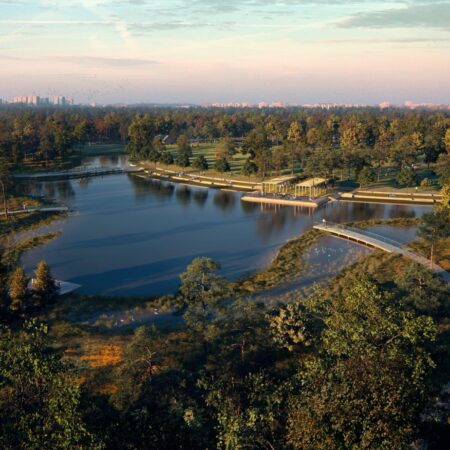 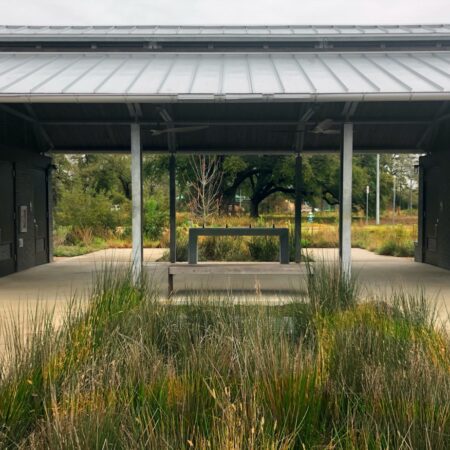 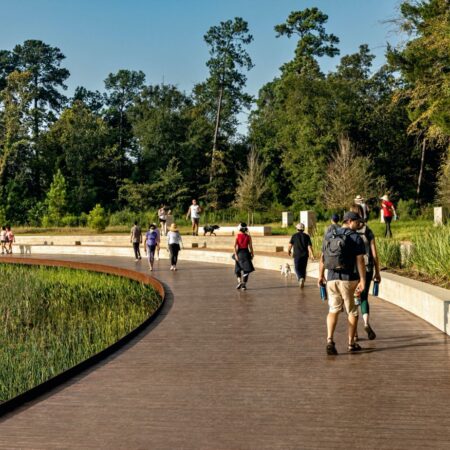 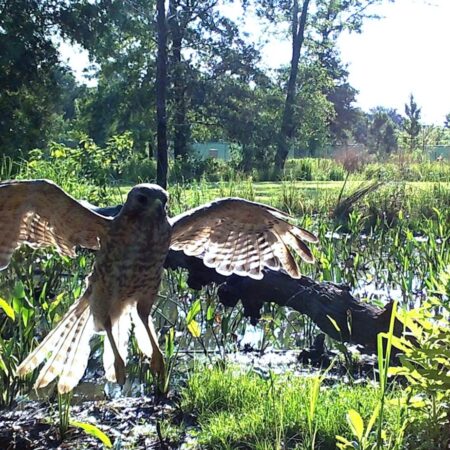 From the new entrance, formal landscape elements—an allée of trees and subtly lit limestone markers—define an axis that extends into the park for more than a third of a mile. It follows the alignment of an original roadway through Camp Logan, all but erased with the passing of time. An unbroken sightline from the entrance to the farthest edge of Hines Lake draws visitors into the heart of Eastern Glades.

Hines Lake is one of Eastern Glades’ most significant features, covering 5.5 acres. Together with surrounding wetlands, the lake creates a new habitat for wildlife; it also helps to mitigate flooding and contributes to the reclamation and reuse of stormwater. A system of bioswales is designed to filter rainwater that flows into the lake, creating a cleaner and higher quality habitat for turtles, fish, frogs, and water birds—and a beautiful amenity for park visitors to enjoy. Terraces and pathways surround the lake, providing ample opportunities for nature-watching, strolling, and contemplation along the water’s edge. A boardwalk meanders along this more secluded side of the lake, providing an immersive experience in nature.

Eastern Glades adds an additional 2.5 miles of trails and pathways to this network of walking and running trails. The Seymour Lieberman Trail, a popular destination for joggers, has been extended to a full 3-mile loop, with new connections to the surrounding areas of the park. Serene, natural-surface paths weave through varied ecological habitats, offering opportunities to spot wildlife and to experience the restorative benefits of immersion in nature.

Working together with the Memorial Park Conservancy and with ecological, biological, and conservation scientists, the Landscape Architect developed a conservation plan that seeks to restore the parkland’s native ecologies. Ongoing efforts involve the removal of invasive species and reforestation with native plantings to establish a healthy forest structure. Native trees such as Pinus echinata and native plants like Pontederia cordata and Sagittaria lancifolia were planted to restore the forest ecosystem and wetlands plant diversity. The Eastern Woods, a 12-acre forest with diverse native trees and shrubs, plays an important role in habitat restoration. Situated along the eastern edge of Memorial Park, the forest creates a sense of seclusion for parkgoers and privacy for residents of the adjacent neighborhood.

Since opening to the public, Eastern Glades has already become a favored outdoor destination. This once degraded and inaccessible landscape is now a jewel within Memorial Park. As Memorial Park approaches its centennial, Eastern Glades and the forthcoming phases of the Ten-Year Plan announce a clear vision for the future of the park and its significance for the city of Houston—as a place where nature, communities, and culture are seamlessly interconnected.

Other landscape architecture offices involved in the design of landscape: Lauren Griffith Associates 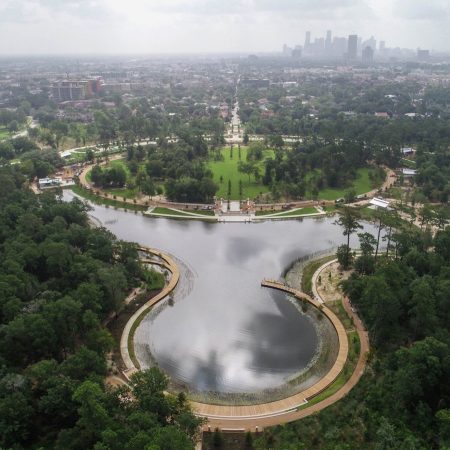 The Eastern Glades at Memorial Park