In 2014, the City of Melbourne undertook a major redevelopment within the heritage listed Fitzroy Gardens. The project saw the return of a substantial section of landscaped open space to the gardens and the installation of the city’s largest stormwater harvesting system, following the demolition of an old garden maintenance depot and its replacement with a new smaller depot facility, visitor centre and cafe building.

This project demonstrates the success of design-led teams in reshaping urban spaces and activities in response to social and environmental pressures. The Fitzroy Gardens had suffered significantly during the Millennium Drought, from late 1996 to mid-2010, when much of southern Australia experienced a prolonged period of dry conditions. Watering the 26 hectare gardens was greatly reduced during the drought, putting much of the gardens under great stress. At the same time the city’s residential population was growing, resulting in increased demand on public open space. 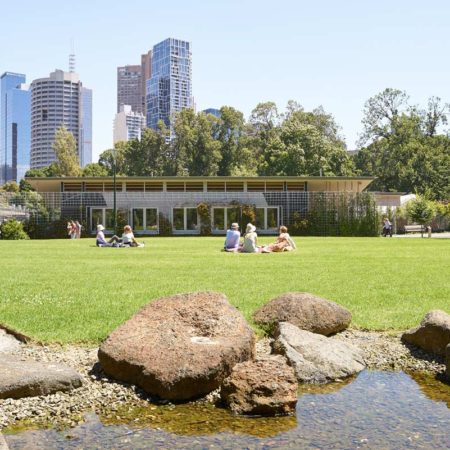 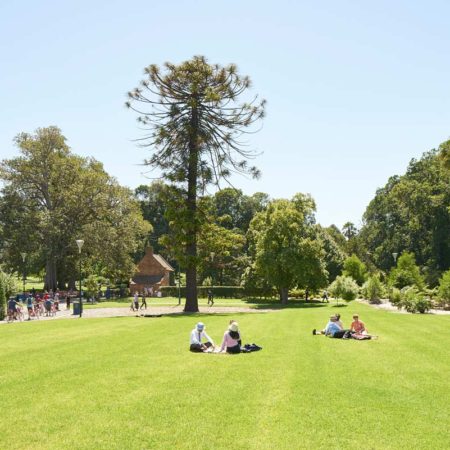 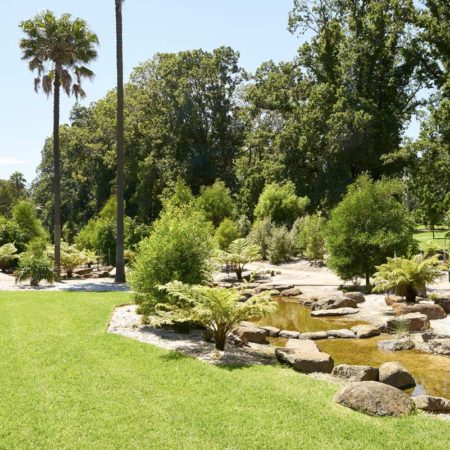 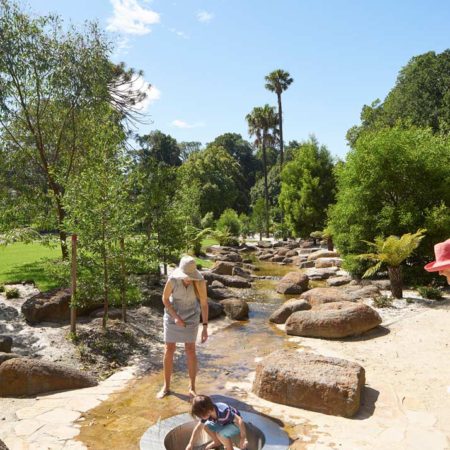 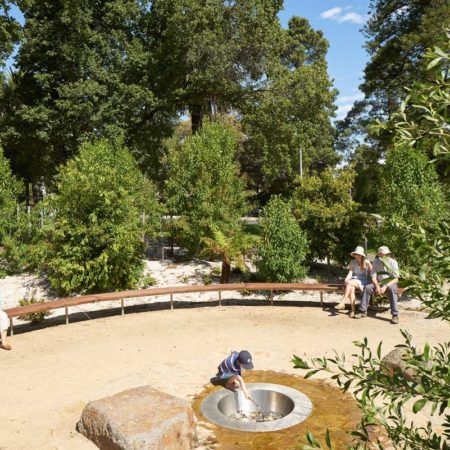 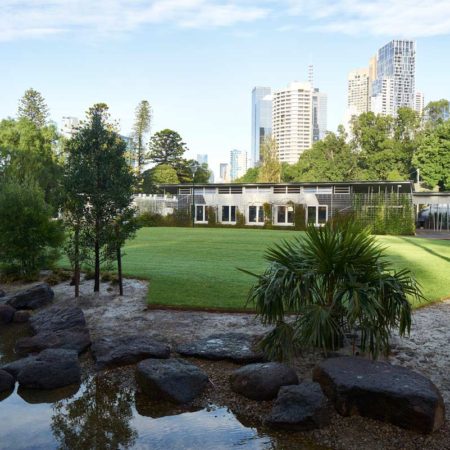 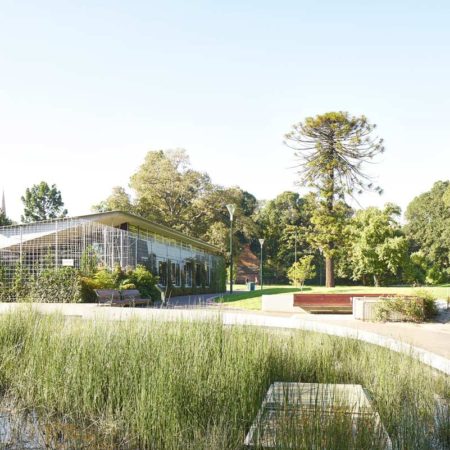 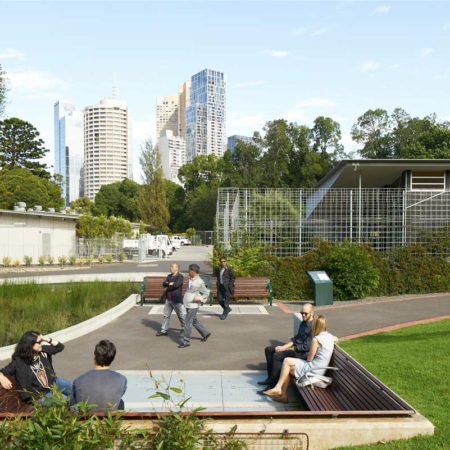 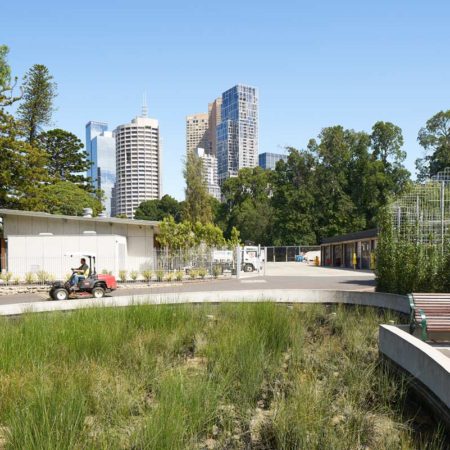 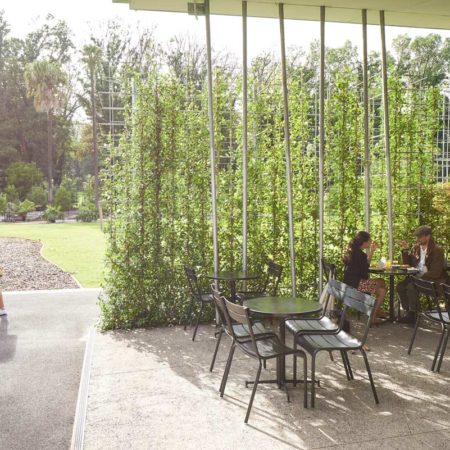 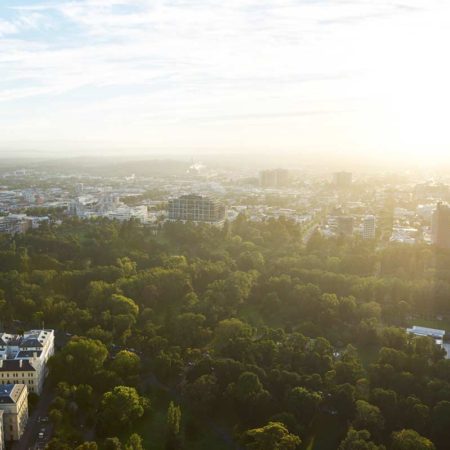 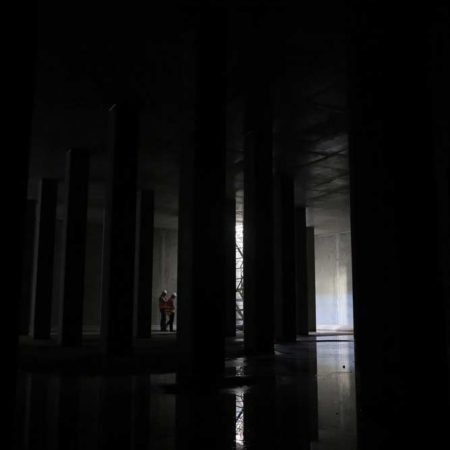 By redesigning the garden’s old maintenance depot, covering an area of 9000m² and formerly unavailable to public access, into a smaller more efficient configuration, around 4500m² of land became available for a variety of new purposes, including the stormwater tank, substantial new landscaped public open space, a new visitor centre and cafe – all significant outcomes given the City of Melbourne’s growing population and visitor numbers and the ongoing impact of climate change.

Stage one saw the installation of the 5 megalitre underground stormwater tank. Coupled to bio-retention filtration the tank provides almost 60 per cent of the garden’s annual watering needs, saving the City of Melbourne around $180,000 and up to 70 megalitres of potable water use each year. The system design also meant that during future droughts, selective irrigation could sustain the existing trees and areas of significant plantings, without relying on potable or ‘trucked in’ water, which is an excellent economic and sustainability outcome for the project. The stormwater harvesting system also reduces pollutants such as sediment, nitrogen, phosphorous and heavy metals entering the nearby Yarra River and flowing into Melbourne’s Port Phillip Bay.

Set under the new public lawn, the tank measures 40 metres by 26 metres and 5 metres high. At 8 metres below ground level the tank has 3 metres of deep soil medium above it, allowing the retention of significant existing trees and palms, the planting of large new canopy trees and significant under-planting along a restored historic rill.
The old rill, which previously ran through a channel in the old depot, unseen by the general public, was given a new prominence in the redevelopment. Running alongside the public lawn and ending in a whimsical, giant plug outlet, the new rill provides a visual tool to help educate visitors on the journey water takes through the gardens on its way to being recycled.

The addition of the new visitor centre and cafe, situated on the western edge of the lawn and adjacent to the popular tourist attraction Cooks’ Cottage, enhances the overall offering of the gardens by providing information services, a base for tourist programs, a place to rest and attractive views out over the new landscaping. The site also connects visitors with public transport on nearby Wellington Parade and provides a picturesque shortcut to the central city.

The visitor centre itself is veiled with a green screen of climbing plants, presenting as an integrated landscape element to the new public lawn. The environmental performance of all the new buildings was optimised by addressing building envelope, shading, daylighting, glazing, thermal mass, natural ventilation, water use, energy sources and space heating and cooling. Photo-voltaic arrays were also installed on the new buildings. Behind the visitor centre the modern and compact new depot is intentionally unobtrusive, yet subtly visible to the public.

Since opening the visitor centre has exceeded all predictions for visitor numbers, while the cafe is popular with local residents, nearby office workers and visitors alike.
This ambitious project resulted in a sustainable and creative response to environmental and social pressures, extracting value from a previously underutilised and overlooked parcel of land. The process of transforming the site involved the collaboration of many disciplines, contributors and stakeholders over multiple years, from development of the master plan to the built outcome. This has ensured this substantial new urban space and the associated new facilities properly integrate with the existing public realm of the historic Fitzroy Gardens.