A LEED ND Platinum community, Hassalo on Eighth transformed Portland’s underdeveloped urban commercial zone into a vibrant, eco-friendly, 24-hour neighborhood. Redefining the superblock as the “ultimate revenge of the pedestrian,” Phase 1, Hassalo on Eighth, is 1.1 million SF, the city’s largest residential development with more than 650 sustainable housing units in the Lloyd Eco-district and anticipated 1,000 market rate four-block Phase 2, Oregon Square. Located at the nexus of transportation near the city’s entertainment and shopping district, Hassalo on Eighth is one of the continent’s most significant bike parking projects encompassing 1,200 below-grade stalls with showers, lockers, valet, and repair services.

Three new multifamily housing buildings of varying density replace existing surface parking with 820,000 SF of residential space and 50,000 SF of commercial area with an exciting lineup of local entrepreneurs. Street level retail includes an anchor grocer along with immediate access to both the light-rail and streetcar systems while the community plaza and water street contribute to the district’s increased human cityscape. The disposition of massing on the four-block development was carefully analyzed to preserve access to sunlight to the central plaza and water street. 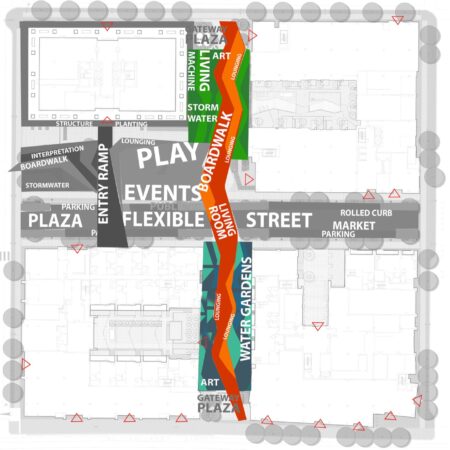 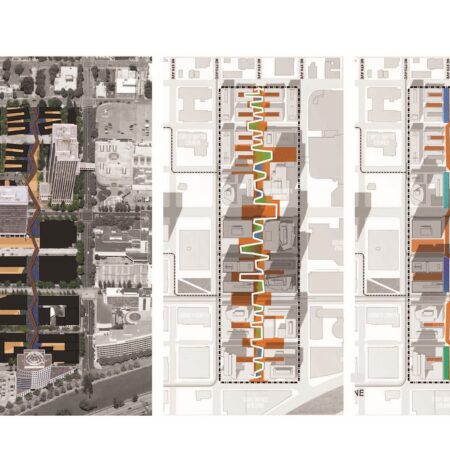 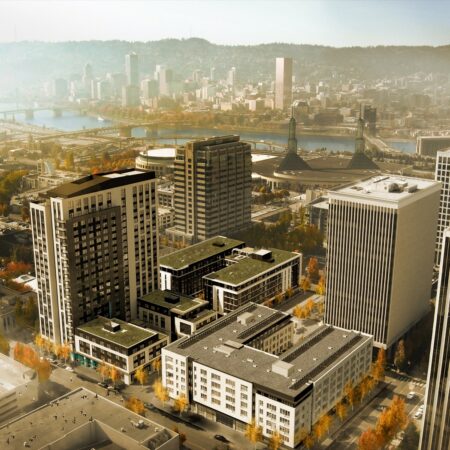 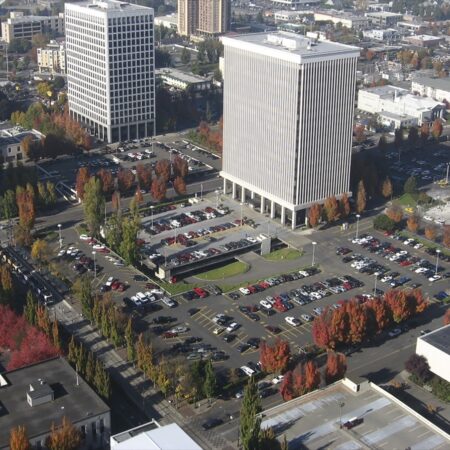 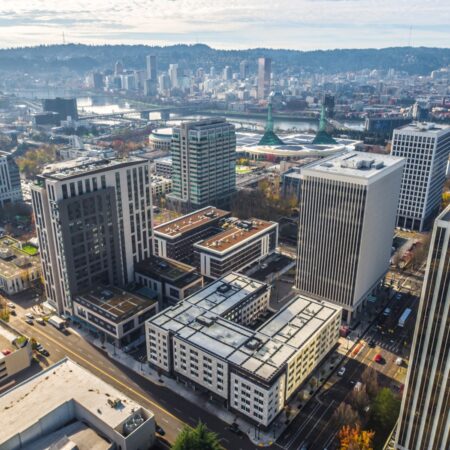 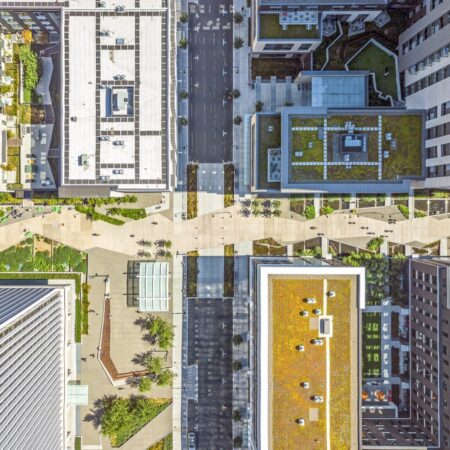 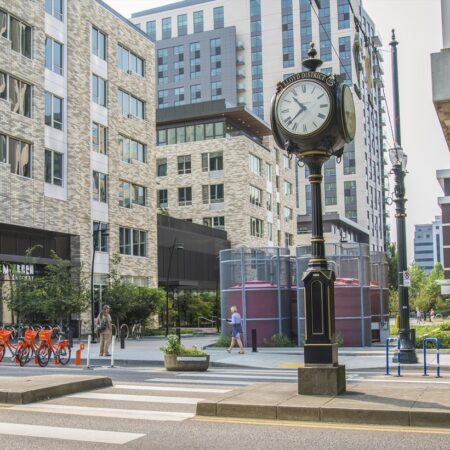 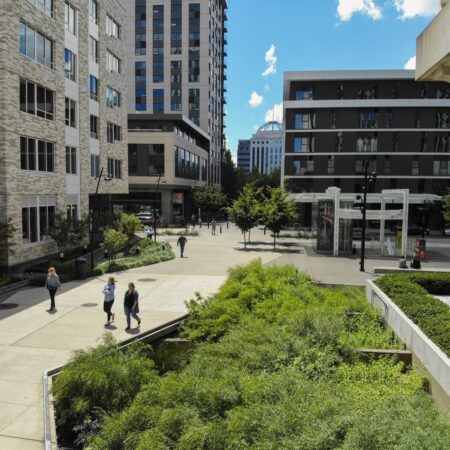 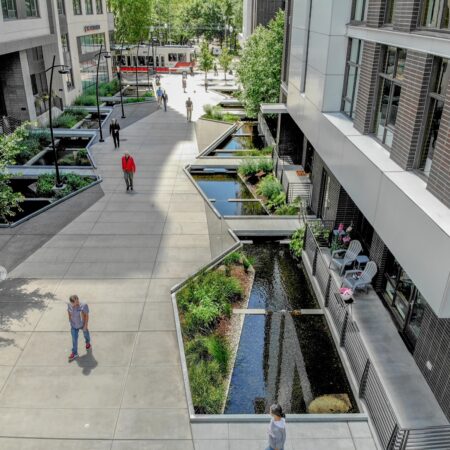 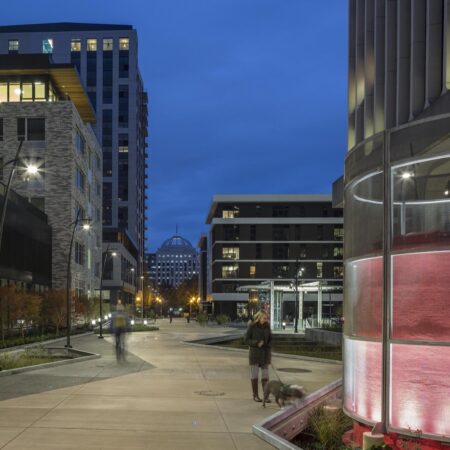 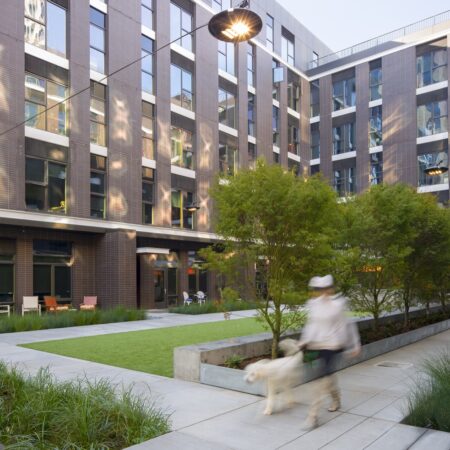 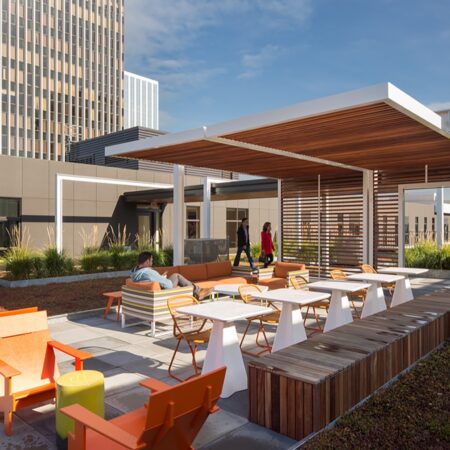 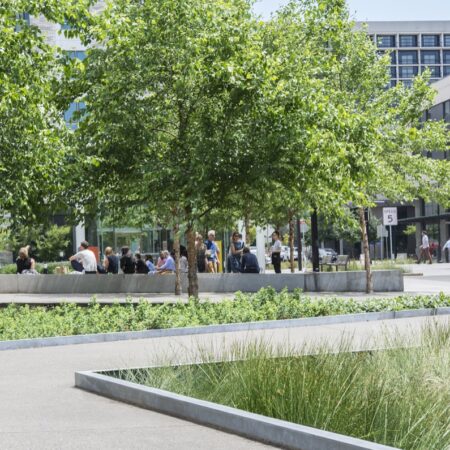 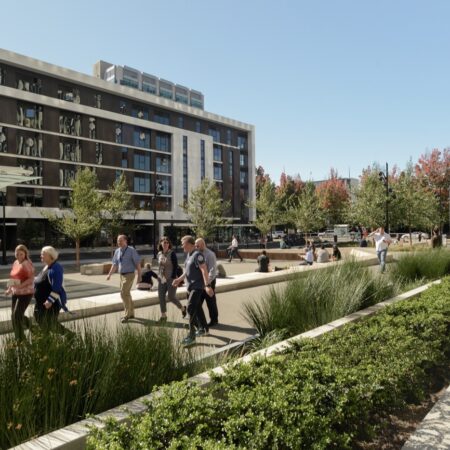 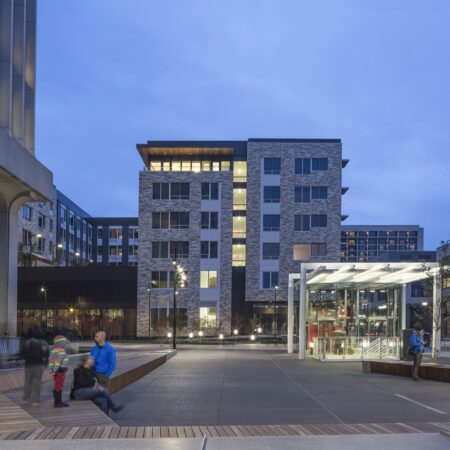 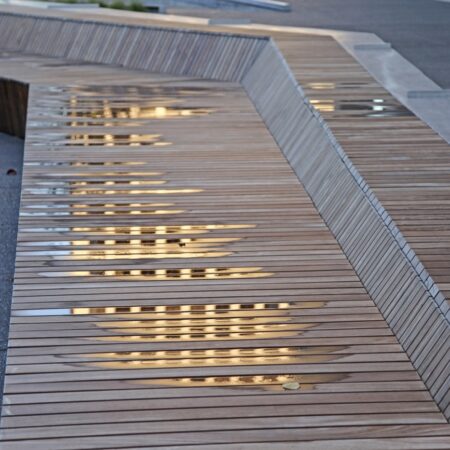 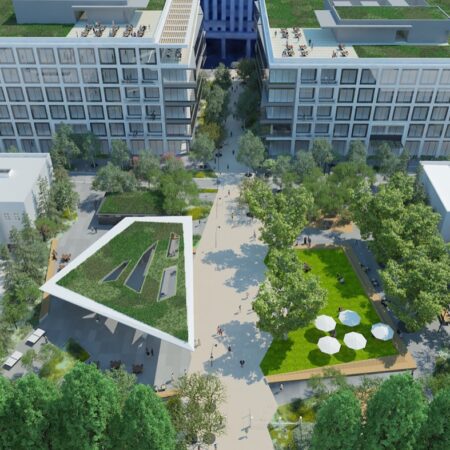 At the forefront of the National Resilient Cities’ trend, the Hassalo on Eighth manages all water via the largest on-site decentralized treatment and reuse system in North America, a Natural Organic Recycling Machine (NORM), located in the community’s 13,000 SF main plaza and along the water street, the district’s heart and soul. The water street engages multiple green roofs covering over 38,000 SF into an expressive recycling system redirecting flow away from stressed city sewer infrastructure and having a net positive impact on stormwater. NORM treats and recycles 100% of the grey and black water through a series of trickling filters and constructed wetlands designed to meet 100% of the toilet flushing, cooling, and landscape irrigation demand. As a result, wastewater is diverted from the municipal sewer system with NORM generating no waste and bio-solids reducing water usage for the four buildings by 50% or approximately 7.3 million gallons of water per year. All constructed beneath the four-block district’s pedestrian water street creating an exposed look wholly unique from the surrounding neighborhood. The area’s wastewater system was in such need of innovation that the city discounted its system development charges by 60%, typically accessed to projects requiring infrastructure improvements. NORM not only conserves water for the area, it is also a cost-saving solution that frees the city from any further strain on its infrastructure.

Hassalo on Eighth places emphasis on livability with sensitive planning, outdoor comfort, and enterprising urban ecological infrastructure. Along with NORM, the green roofs and rainwater harvesting gardens are part of the stormwater capture system, a symbol of the development’s progressive environmental identity, a model of green design, and Portland’s first Eco-district. In all, the reduction in system development charges, operations and maintenance, required testing, and capital investment resulted in a 2.4-year payback to the project.

Landscape improvements restored the site’s water cycle to pre-Lewis & Clark conditions, lessening the burden on aging infrastructure, reducing peak flows, and recharging aquifers. The site’s green infrastructure backbone, the water street, collects, conveys and treats stormwater as part of a larger integrated system. Its flowing waterways are sourced from harvested rainwater; its formation brings joy to people and quenches the thirst of the growing urban ecosystem. The large planters create a linked network of green islands, which along with the eco-roofs, quadrupled the site’s vegetated footprint. Planted with a diverse native and naturalized palette, the water street and associated gardens support migratory songbirds and create a pollinator pathway. A dense, walkable community, the development taps into a superb transit system and promotes cycling, allowing residents to leave auto-dependence.

The landscape, integral to the experience, is also a place where one learns about the sustainability. The knowledge is shared with the occupants via feedback dashboards displaying shared energy savings, water savings, local transit times and with hopes that similar solutions are transferable to future local developments.

Hassalo on Eighth ultimately represents a model of environmental and social sustainability. The development has added housing to a transit-served area with over 25,000 jobs in the walkable vicinity. Weekend markets, movie screenings, and seasonal festivities in the central plaza contribute to the district’s attractive image and establishes a community which celebrates the Eco-district ethic within a livable metropolis. 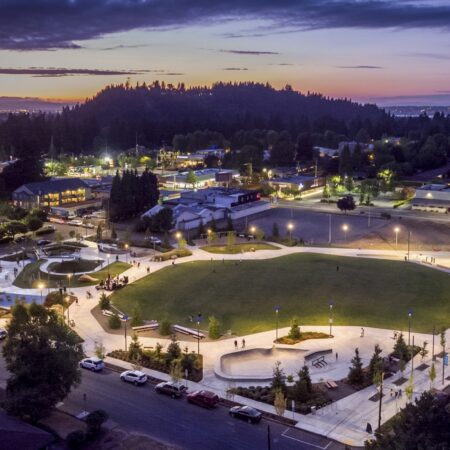 Gateway Discovery Park: The Power of Hope for an Underserved Community