3LHD architects constantly explore new possibilities of interaction between architecture, society and individuals. With contemporary approach, the team of architects resolves all projects in cooperation with many experts from various disciplines. Projects, such as Memorial Bridge in Rijeka, Croatian Pavilion in EXPO 2005 in Japan and EXPO 2008 in Zaragoza, Riva Waterfront in Split, Sports Hall Bale in Istria, Zamet Centre in Rijeka, Zagreb Dance Centre in Zagreb, Hotel Lone in Rovinj and Amarin Apartment Village in Rovinj are some of the important highlights. 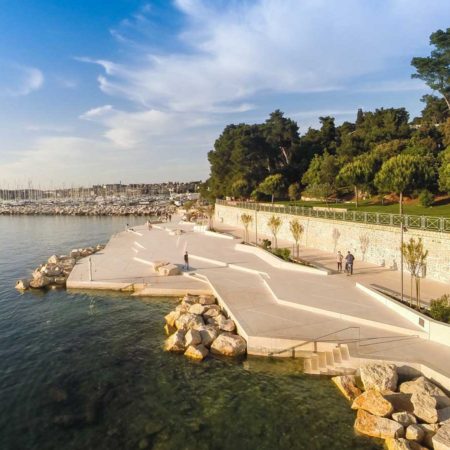 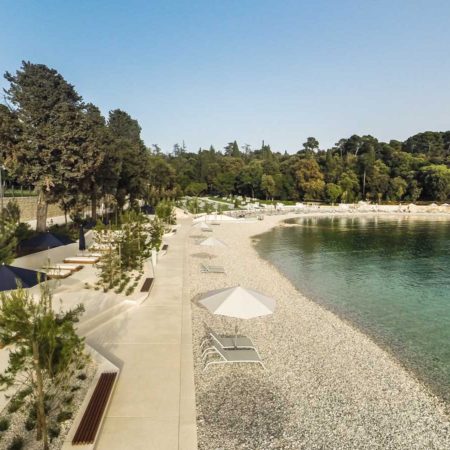 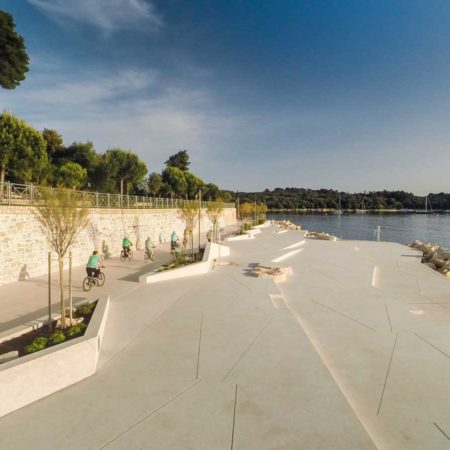 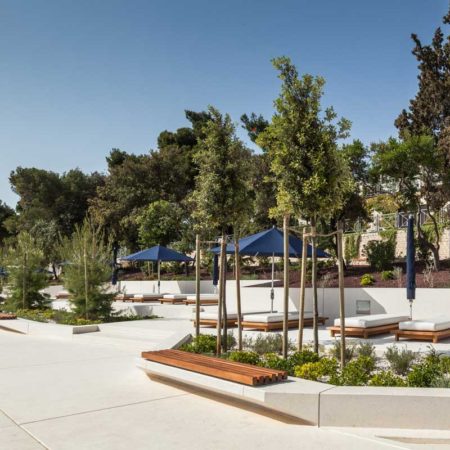 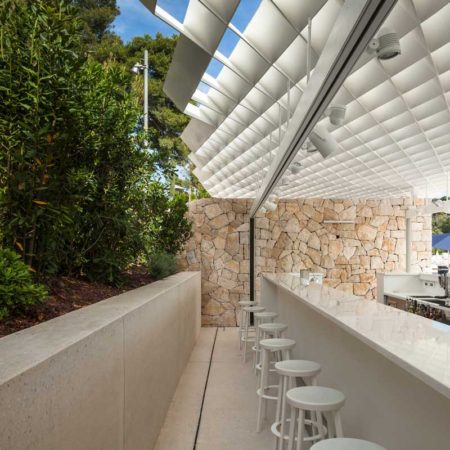 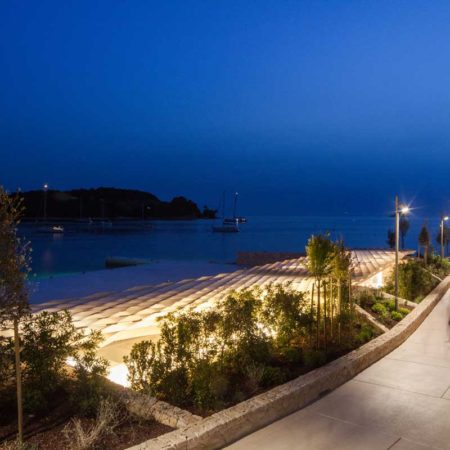 Mulini Beach is located on the exit from the central part of Rovinj and in the continuation of the promenade, wrapped in a rich green public park. It is an extension of the city’s public area. An extremely important factor in the design was the relationship to existing terrain. The environment is completely different depending on the time of day due to the influence of the tides so the design was dependent on the sea. That is why the entire area of the beach is divided into two zones. The first zone is designed as a natural topography, with lots of fractured surfaces for sunbathing while the calmer bay area can sustain a pebble beach. Mulini Beach Bar, a beach facility with a large bar, locker rooms, showers, toilets and an information desk is located in the center of the zone. It is designed as a pavilion with a floating pergola roof – a steel structure that rests on six points, whose final shape was determined by an analysis of the sun movement through the summer months.

With a newly designed public beach and promenade it can accommodate a larger number of users, including disabled and mobility impaired people, cyclists and other recreational users. Three of five beach access points leading from the promenade are made with ramps at an incline of 1-5%. The construction of underwater mounds has transformed the shoreline and protected the beach and promenade from extreme weather conditions (waves) thus making it available for use even when weather conditions are not ideal. 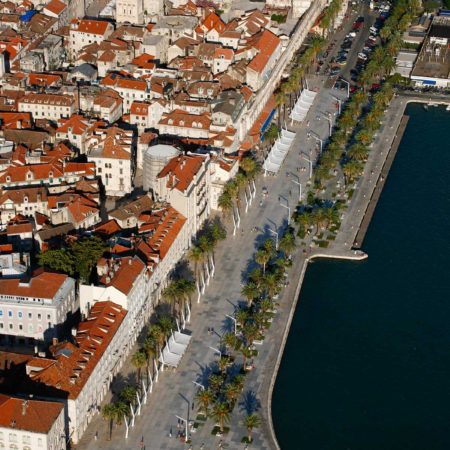 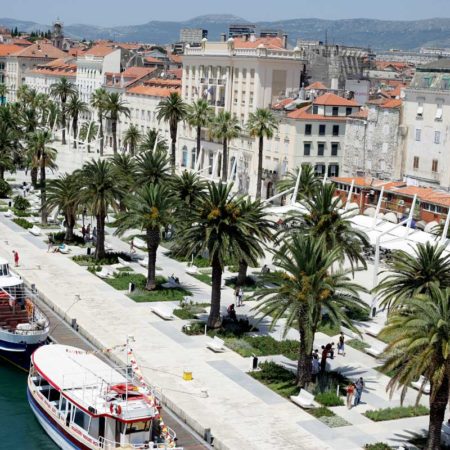 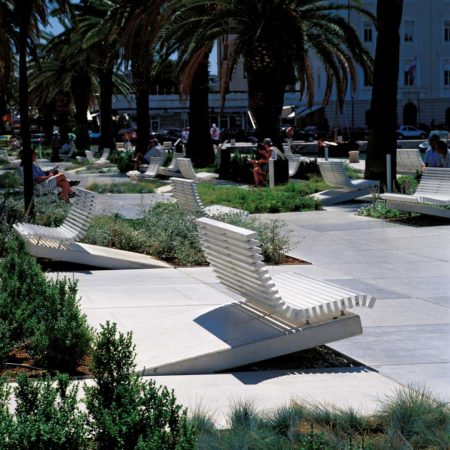 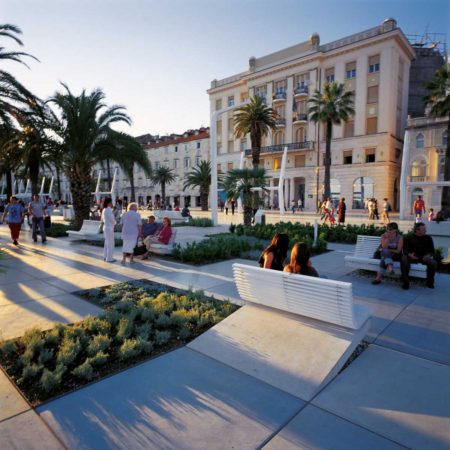 The city of Split and its waterfront, the Riva, as the paradigm of its history and character, are among the most interesting and most specific sites in the Mediterranean. Split waterfront is an urbanized, public, open and accessible space, 1700 years old. It stands in front of Diocletian’s Palace, once the home of the Roman emperor. The modular Roman form of the palace in the latter phase became the framework that shaped the city and directed its expansion; in the same way, the dimensions, materials and form of the modular network of concrete elements laid on Riva directed the arrangement and positions of all the other elements of the public space.
The waterfront is the focal point where the city meets the sea. 250 meters long and 55 meters wide, it is also the main public square, the space for all kinds of social events, promenade by day, parade by night, the site of sport events, religious processions, festivals and celebrations. The project rearticulates the space for all the mentioned events and harmonizes them on a new integrated surface. The solution uses not only architectural design, but also materials, to respond to all the challenges of utilization set before the Riva. All urban elements and equipment was specially designed for this project and they try to meet local spirit and atmosphere. 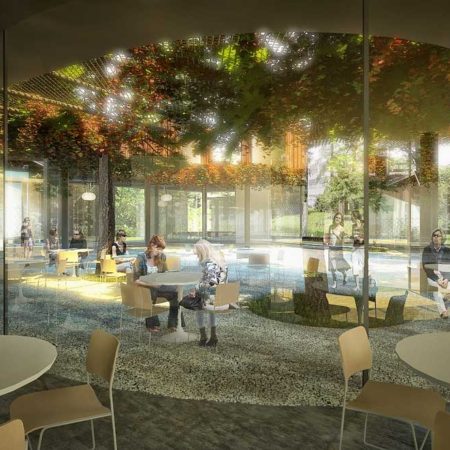 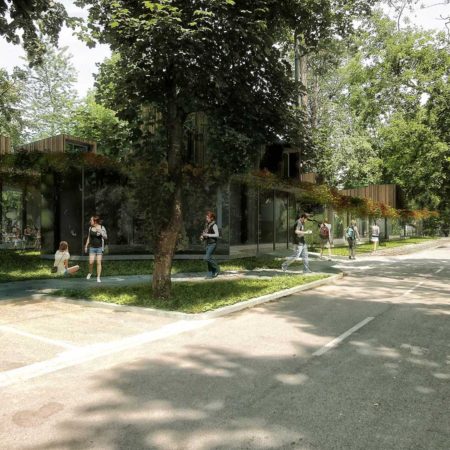 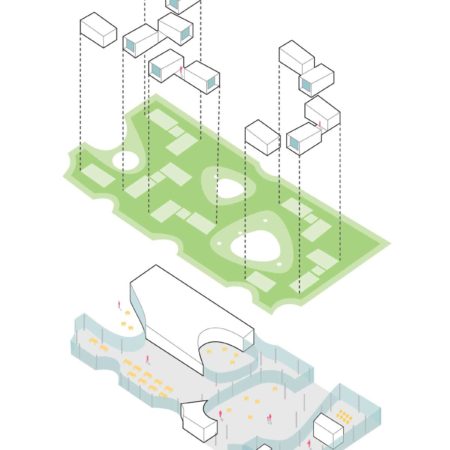 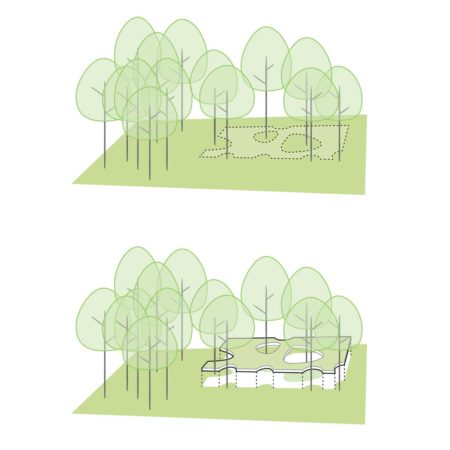 The most important element and the inspiration for this project is the location, with densely distributed high quality vegetation. The idea of the new Pavilion_Restaurant is to construct space by mapping the area of the trees. By raising this “cut” green territory in the air the space “below” is created. Another functional element and a seasonal regulator of light is a “vegetative” canopy that has been formed along the roof edge. Open atrium spaces let the light enter all parts of the building and provide visual and physical connections with the natural environment. The large entrance atrium is a meeting place and an open terrace. Two main restaurants are located next to two main building atriums. The canteen space is oriented to the Forest Park and the sliding doors enable its expansion to the exterior.

The accommodation units are designed as freestanding volumes raised on the pavilion roof for privacy. Zones with different plants were formed around the apartments, on the roof surface. The idea is to create a sustainable house, which will contribute to the environment. The roof and its oversized vegetative canopy are excellent regulators of heat, a thick protective cover that keeps the house from cold in winter and heat in summer. The landscape design is an integral part of the basic architecture concept. The largest part of the roof surface is covered with succulents typical for roof gardens; other areas are organized into regular shapes inspired by plant growing plots. 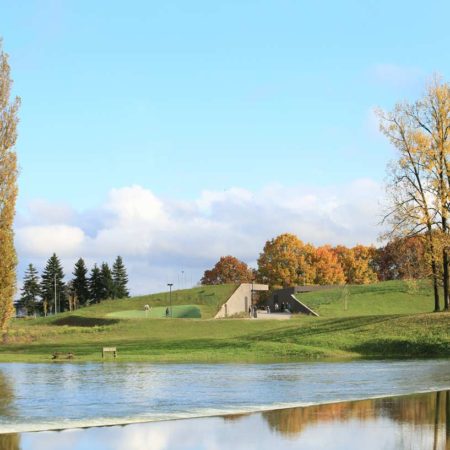 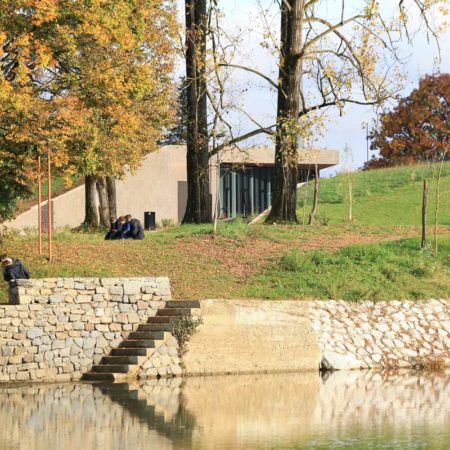 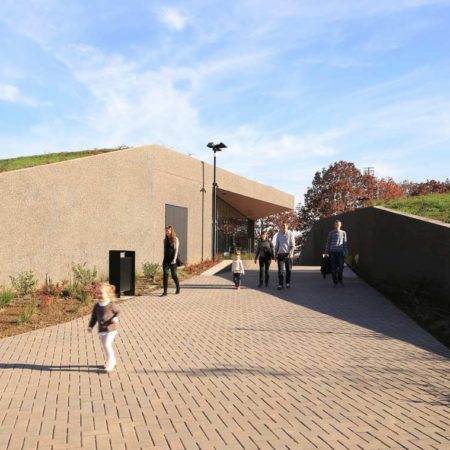 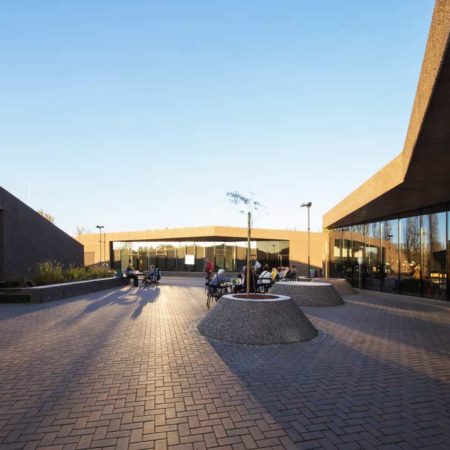 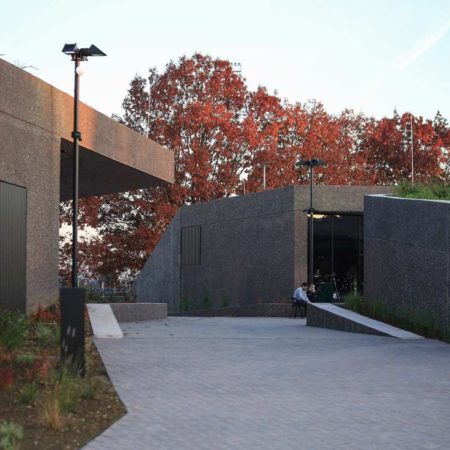 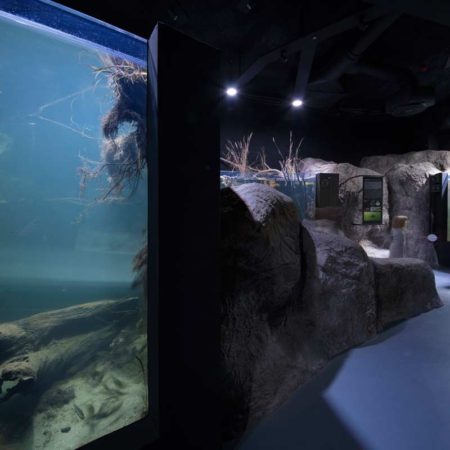 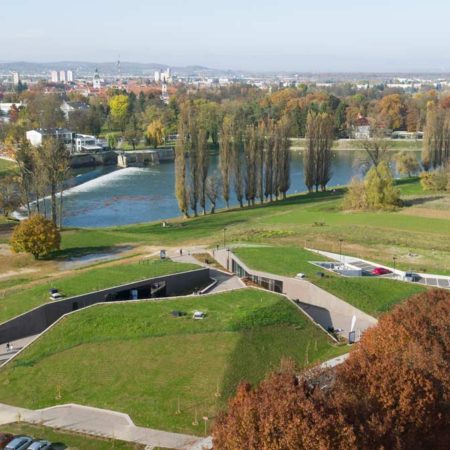 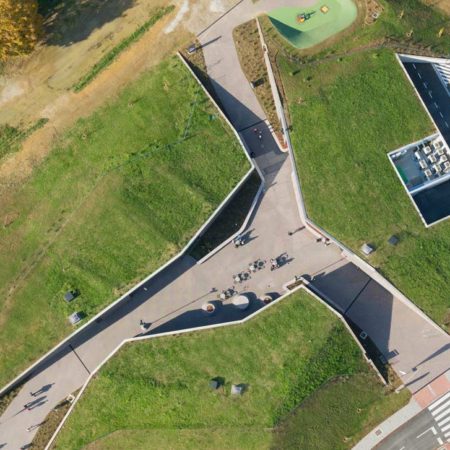 The aquarium is located on a site of an abandoned campsite by the river Korana. The starting point for the aquarium concept were embankments or “šanci” – design elements inspired by the “Karlovac star” (old city of Karlovac built in the shape of a star) which served, together with mounds, as protection from flooding.

The idea was to create a new focal point for visitors by the river Korana. Three walking routes were formed: towards the city center and the river; towards the south and the sports and recreational center; and towards east and the road access. A new point was formed at the junction of the walking routes – a square around which all of the aquarium facilities are located. Public spaces that require daylight for operation are placed in buildings around the square: main entrance with a souvenir shop, catering facilities and congress, office and education spaces. The public spaces are connected to the exhibition part which is located on the basement floor due to specifics of plant and animal wildlife that require complete control of lighting. Each of the aquarium buildings has only one façade – the one oriented towards the square. They are “invisible” on the sides facing the edges of the plot. The roofs and outward facing elevations are covered with ground and grass and formed as parts of a park, playground and promenade. The exhibition layout displays the flora and fauna of Croatian rivers and their ecosystems, and it is designed to show a “typical” karst river.