China is undergoing the greatest urbanization in the history of mankind. More than half of China’s population of 1.39 billion people now lives in cities, up from 20% at the start of China’s economic reforms in the late 1970s. The movement of hundreds of millions of people has brought a boom in real estate prices and a demand for new thinking in urbanism and architecture among property owners, developers and the Chinese public.

For thousands of years the people of China lived in homes, villages, and towns they built for themselves using local materials and following local traditions. Today they do not. The Great Urbanization following the Cultural Revolution has changed all that. Today we may begin to find ourselves living in cities that belong less to a world of environmental and communal evolution and more to a world of trendy ideas. For better or worse, these ideas come not from the people who live in our cities but from government officials, professional planners, architects, landscape architects, traffic engineers, the construction materials industry and the marketing departments of real estate development companies. Today our cities are becoming designed and built “for us, not by us.” As cities continue to evolve, we do not always get the things we need but rather the things developers and marketing specialists think we want. Today a “promise of happiness” is on sale at flashy “show flat” sales offices in new super-block apartment complexes.

We deserve better. We owe it to ourselves and the ground we build on to create something more humane. We should live in a city where every block is a city within a city. Where on every block people live, work, and play, where the traditional urban fabric of a human-scaled-tree-lined street is dominated by social interaction. Our firm reinforces this dream in our work. It is our hope that in the future we will see our built environment evolve into a more truly walk-able city; a city where ring roads are less important than pedestrian promenades. A city where regardless of the neighborhood’s location, people have access to localized cultural and social amenities, great restaurants, bookstores, cafes, cinemas, theatres, opera houses, art galleries, parks, museums, schools, libraries, health clubs, excellent health care, and open air shopping streets that deliver what we need most: social and cultural inclusiveness.

By understanding these challenges within this fast-paced environment, our team devotes our energy towards design solutions that help generate a positive sense of place and encourage human interaction, recreation and community. But this can be very daunting. In this new age of development, many clients in China lack experience or the knowledge and vision to understand design process and rely instead on glossy magazine photos to portray a vision they may have. A fair amount of time is taken to educate our clients about the layers needed to reach their goals begin with building a healthy relationship through communication, both on a personal and professional level.

We are only as good as our clients, without their understanding and support from early design vision to construction quality problems, a project can easily fail. We understand that at times good urban design need not be subordinate to the demands of expedient infrastructure and traffic management but instead should evoke a sense of discovery and promote healthy communities, quality of life, education and curiosity within everyday experiences at the heart of an evolving city. We celebrate cities and their complexities, contradictions and constraints and promote their continued evolution.

We are not preservationists so much as we are futurists. Our firm’s work is grounded in craft and detail inspired by the days when people of China lived in homes, villages, and towns they built for themselves using local materials and following local traditions. We are inspired by the practice of landscape architecture as a natural, balanced, poetic and whimsical expression of urban life and we carefully consider the distinguishing spatial characteristics of a site, its connections to surrounding areas, the natural environment, cultural conditions and its history. We work towards ‘trends’ as less concerned with creating something iconic and strive instead towards creating a design language that are based on modern patterns of cultural behavior as a catalyst for human interaction, recreation and community.

People live in cities to be in close contact with other people. They want a high quality environment in which to maximize that contact. They want to walk out of their home onto a street teeming with life and to identify with a place that has both visual and visceral beauty, security, privacy and tranquility. Most of all people in cities want to be around people who love people and who want to use the same things that other people use to enjoy a better life. We attempt within our work to demonstrate what we believe modern metropolitan China can be: pedestrian streets full of quirks and life defined by the aesthetics of our time and place. 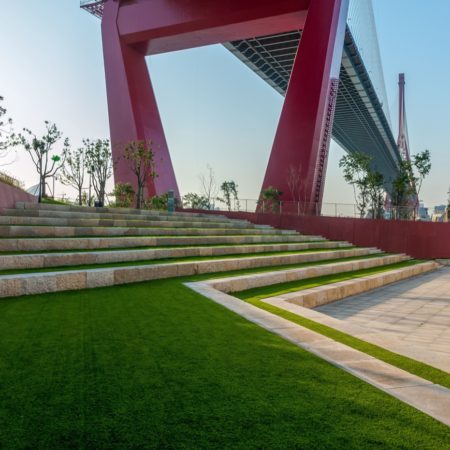 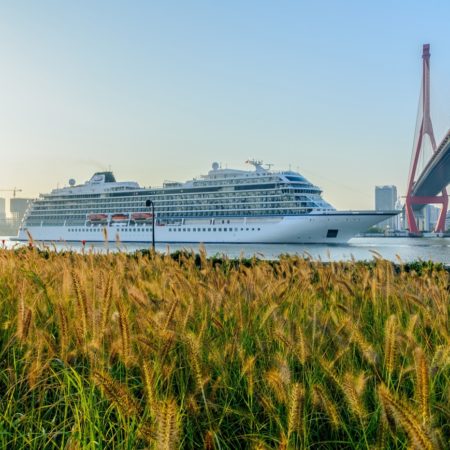 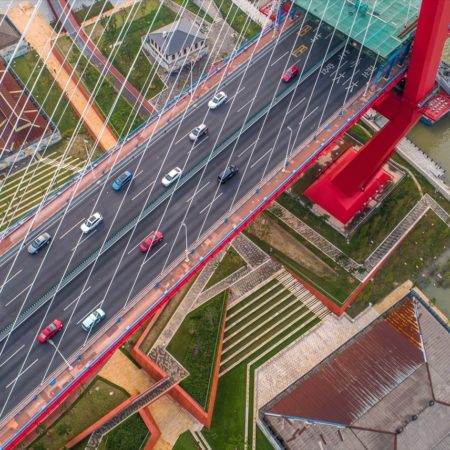 The Huangpu River is a 113 kilometers-long river flowing through Shanghai, China that was first excavated and created by Lord Chunshen, one of the four lords during the Warring States Period (475 BC – 221 BC). From the mid-19th century to the end of the 20th century, due to its unique geographical location and vast spatial advantages, the east bank of the Huangpu River was an ideal location for docks, stacks, warehousing and other sites and was also the best choice for large factories such as shipbuilding. Eventually, bridges and tunnels were needed for more efficient access. In October 1993, Yangpu Bridge, spanning over Shanghai’s Huangpu River opened. It is one of the longest cable-stayed bridges in the world and connects Puxi’s Yangpu District with Pudong. Originally grey and unpainted, Yangpu Bridge was coated red for the city’s millennial celebration and has remained its iconic flame color to this day. Currently, Yangpu Bridge Park is only part of a wider vision to promote a vibrant urban life on the banks of the Huangpu River. Recently the municipality of Shanghai has commenced a large scale reconstruction of the east bank of the Huangpu River that will stretch for 21 km and open the landscape of Shanghai onto the river’s edge. 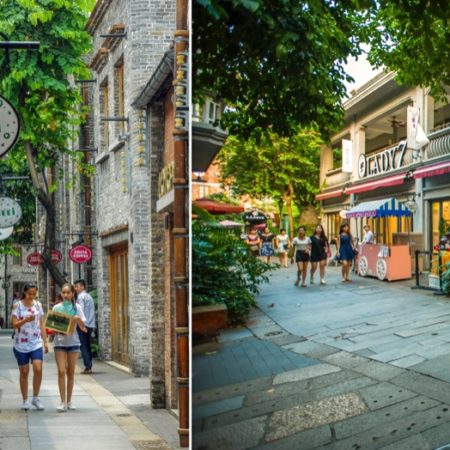 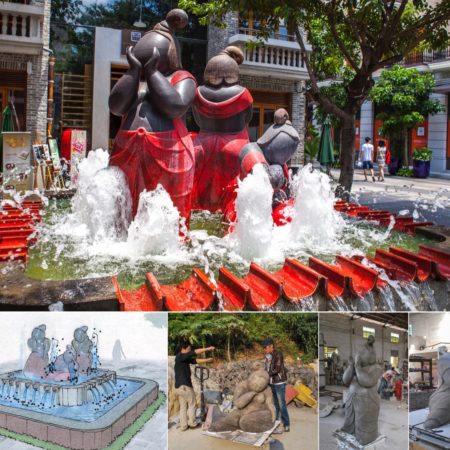 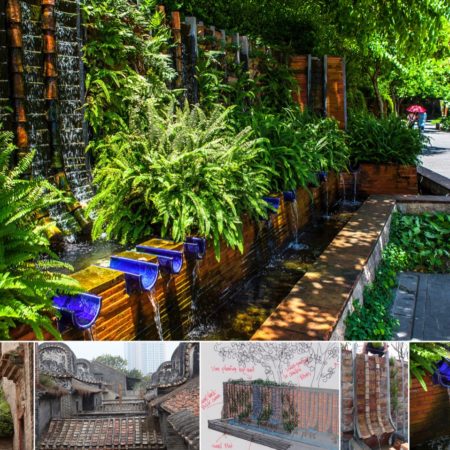 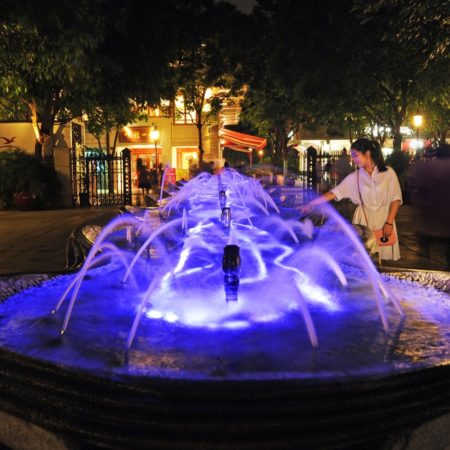 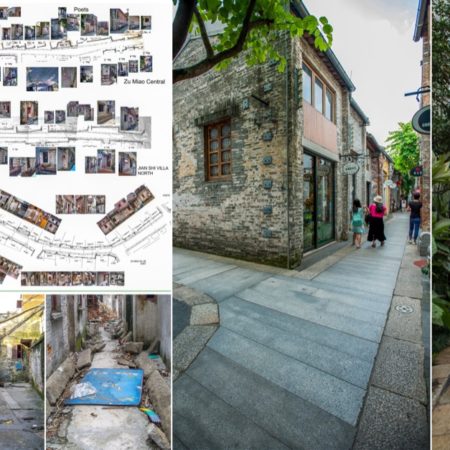 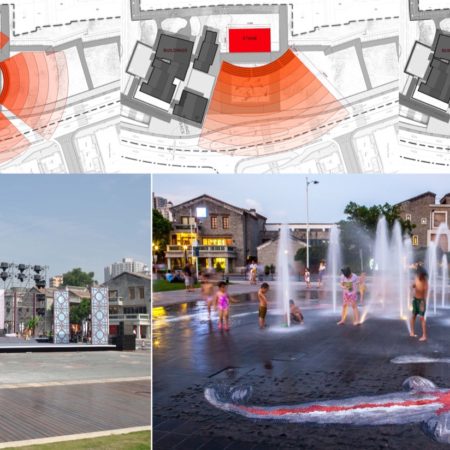 When we look at the most beautiful environs in the cities, towns, and villages of this world, we are always impressed by the feeling that they are somehow organic in nature. Everything seems to fit together. When we travel the world we are constantly searching for these places. Places where there is a human scale in every detail- large and small. Places where there is a feeling that everything was designed to support the great diversity of life and a realization of the physical and spiritual elements that make one place different from another. Renowned as one of China’s leading centers of art and scholarship Foshan, China is the third largest city of Guangdong Province, and adjacent to the 900-year-old Song Dynasty Foshan Zumiao Temple. Foshan Lingnan Tiandi, a large scale adaptive re-use historic preservation development, has become a captivated atmosphere for entertainment, work, shopping and dining with indigenous tropical flora, playful water features and tree-sheltered lanes and plazas. A $300 million commercial achievement of urbanization, Lingnan Tiandi demonstrates what modern metropolitan China can be. To deliver beauty in this new age of China we must find a way to connect with the psychological and practical demands of a contemporary society. This is always a challenge. Foshan Lingnan Tiandi, a renovated old town of “in-between” spaces made from former factories, shops, and houses within an ancient sector of Donghuali is hometown to ceramic art, authentic Cantonese food and martial arts. 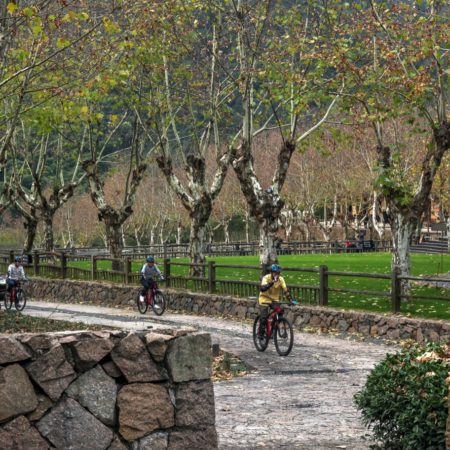 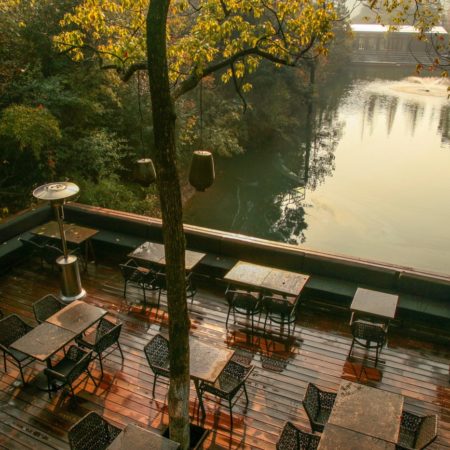 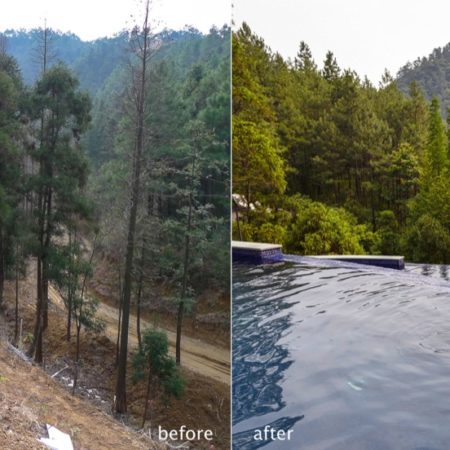 Mogan Mountain is located in Zhejiang Province China, 60 kilometers from the provincial capital Hangzhou and 200 km from Shanghai. It is part of the Moganshan National Park at the edge of Moganshan Town. Known for its cool temperatures and crisp refreshing breezes, Mogan Mountain first enchanted foreigners in the 1880s where rooms and houses were rented from locals. Eventually by 1910, foreigners had set up summer homes on the hill only to abandon them during the rise of the Communist party in 1949, when the villas were handed out to different work units or “danweis” from Hangzhou and Shanghai. In 2007, through the National Code of Urban Planning, things began to change when the government started working towards establishing a more harmonious urban-rural relationship. This was done by restructuring land use, reforming property rights and promoting ecological restoration of the environment aimed to improve the rural environment in the Hangzhou area, one of the fastest growing regions in China. As a result, a newly designed countryside has started to reflect the demands and tastes of citizens who want improvement in air and water quality. A slow lifestyle has become more attractive to urban citizens who are increasingly interested in traditional life experiences away from their intense work in the cities. Naked Group, a small boutique retreat was looking to satiate the growing demand for a city getaway from Shanghai within the rolling hills, tea plantations and bamboo forests near Shangxiazhuang Village, in Moganshan. 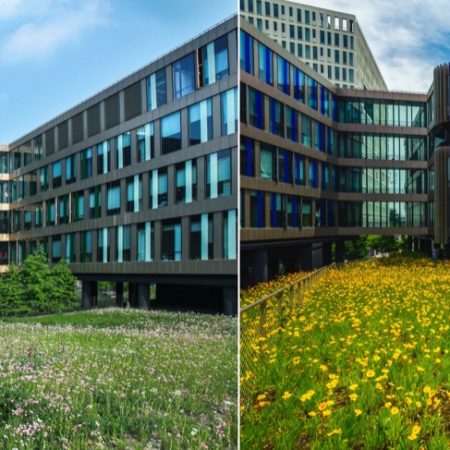 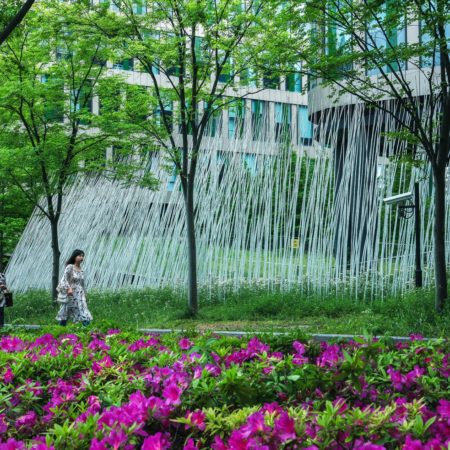 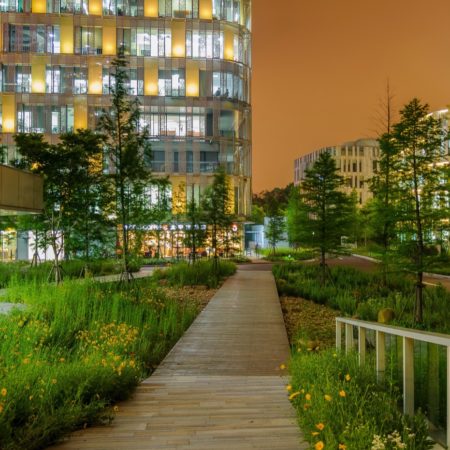 China Fortune Tian Di is a new office complex located in Xuhui District of Shanghai and is known for attracting tenants focused on innovation. Through an interplay of folds and cuts, the landscape including the overall circulation and function are defined by a variety of views, texture, light and topography. Voids found in the meadow give light and space into the structure and open up as courtyards from below. This ‘built’ topographical setting showcases how nature and architecture blend and visually demonstrates how the integrated practice of landscape and architecture can convey a dramatic environmental awareness. The site is located by the edge of a canal previously unknown to the public. The canals grey walls were replaced with a tree-lined embankment of Taxodium trees, native grasses and wildflowers with floating gardens added as a pollution deterrent. The canal now hosts a public walking path along its edge where nature reclaims its rightful place in the heart of Shanghai. Landscape and architecture both create a sense of movement. The building’s façades are covered in vertical blades which protect the structures from the powerful Shanghai summer sun. They combine various different colors: one side is covered with pale gold aluminum and the other with ceramic in shades of green and blue, depending on the façades. This dual interplay of colors and material, depending on their location creates a sense of movement of green, blue and golden yellow hues. 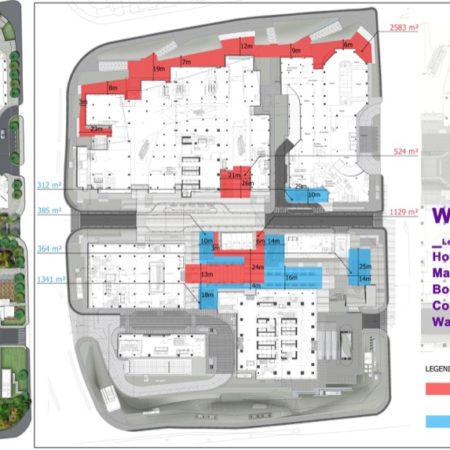 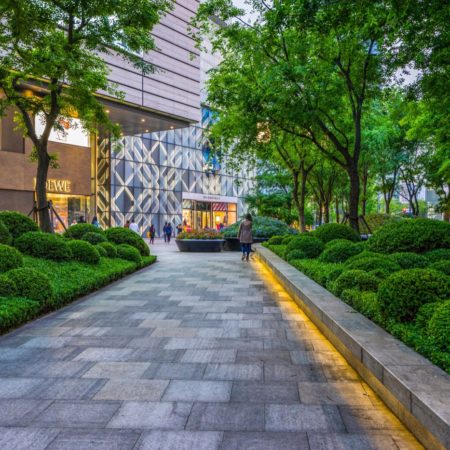 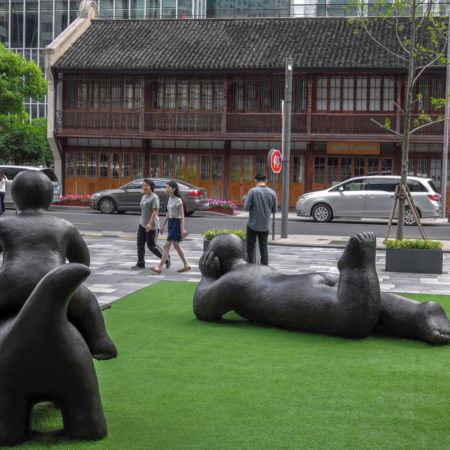 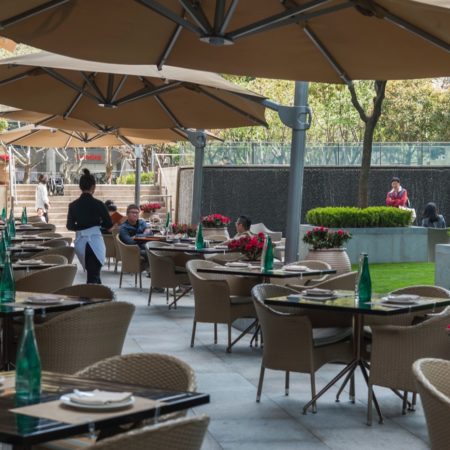 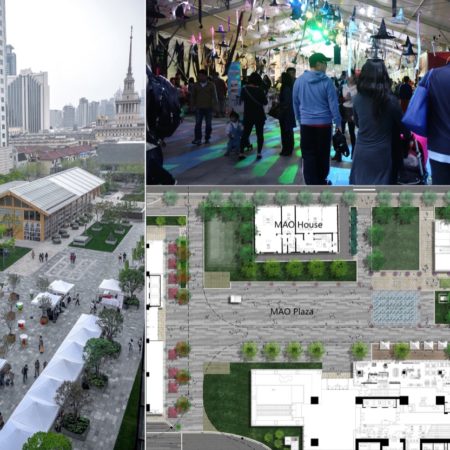 Jing ‘An Kerry Centre, a multi-use complex conveniently located near Jing ‘An Temple is an integrated development in Shanghai’s Jing ‘An District. The 450,000 sqm complex features retail, office, the Jing An Shangri-La Hotel, residential, and underground parking facilities. Easily accessible on Nanjing Road, one of the world’s busiest shopping streets, this landmark mixed-use development fuses the neighbourhood’s historic character with the creativity of modern Shanghai, and serves as a signature landmark for the city. Attractive avenues of Zelkova and Camphora line the paved ramps within gardens of Buxaceae and seasonal flowers. This helps guide people away from the busy street and into the heart of the development. The site contains a preserved house where Mao Zedong stayed in the 1920’s and employs a landscape piazza with an interactive fountain. Rather than literally celebrate a bygone era of Mao, we chose to meet the psychological and practical demands of a contemporary Chinese society with interaction found through an interactive plaza where space is formed naturally from a retail and F&B edge. This encourages activity to spill inward towards the dancing fountain as a central pulse of the square. The dry fountain is at times ‘decommissioned’ for seasonal activities such as markets and art fairs.